Responses by University of Louisville to questions from potential applicants to its RFP.

On March 9, the University of Louisville released its responses to questions submitted following its pre-submission conference on February 28. Some of these answers clarified questions asked at the conference. An e-mail containing the information was sent to 36 individuals and was posted on the UofL website. Most of the recipients were University of Louisville people, but there were individuals from Norton, Catholic Health Initiatives, Baptist Hospital, Jewish Hospital, Stites & Harbison, Kauffman-Hall, Price-Waterson, Health Management Associates, and yours truly.

A total of 71 questions were responded to, or requested information provided in attachments, but amazingly little was revealed. Eighteen of the questions were dismissed with the equivalent of “read my mind,” “you tell us,” “depends on your proposal,” or “will tell you after we have decided.” Bare-bones information seems to be the rule of thumb. These were not the responses I would have expected from an organization that was seriously soliciting responses from a major-league player. “Brush-offs” is a term that comes involuntarily to my mind as I read the responses. You can judge for yourself. Please tell me in the comments section if I am being unnecessarily harsh.

Question 14 & 15. Financial status.
University Hospital is making lots of money. In 2010 its net patient service revenue was $430 million. Despite transferring $75 million to the University of Louisville from surplus cash flow and other sources, it is making a decent operational profit.

Question 58. Financial transfers to the University.
The $75 million referred to above is broken out into eight different categories for 2012. No details of how this money is used are provided. I think the onus is on the University to demonstrate to the State Auditor and the rest of us that this money was better handled then the Passport money and not used as a slush fund. Surely good records have been kept and are available. Why hide the information? 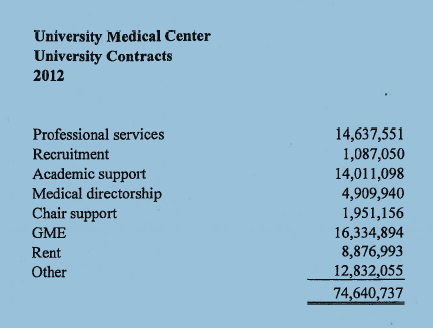 Question 2. Existing Relationships.
When asked about intentions relating to existing relationships with other institutions, the seemingly coy response is ”there is no intention in the RFP to alter such relationships.” This of course says nothing about the intentions of the University.

Question 7. QCCT funding
The University assumes that this state and local funding for indigent care will continue without modifications. It expects $34.4 million in the current funding period.

Question 12. Governance issues.
The University appears to be willing to satisfy Gov. Beshear’s requirement of appropriate control of a public asset.

Question 27 & 28. Open records requests.
Despite being resistant to responding to open records request itself, the University does not seem as committed to protecting proprietary information of potential applicants with the same passion.

Question 31. Site visits and restrictions on communications.
The University restates its requirement that “proposers should not attempt to contact or meet with any campus representatives during the course of the RFP.” I have seen that the University is willing to relax this prohibition for its latest best friend.

Question 37 & others. Electronic medical records.
There were a number of questions about information technology. Apparently the University will in the next 60 days announce a new vendor. I will have more to say about this later. I have been uncomfortable about the way the University has planned to market such patient information.

The financial statements and other attachments are available here.  Applications remain due on March 23. Not a lot of time for such a massive undertaking.

I urge you to read for yourself the way the University and UMC have addressed reasonable questions from potential new partners. Somehow I feel I am in the world of Alice in Wonderland. Things do not make sense to me. Even as a concerned citizen with a long association with the University of Louisville, I am unable to “read its mind.” I cannot shake my initial opinion that the University is not serious about seeking a partnership with any other entity than the one it has been planning with for the last three years and which would necessarily have a good idea about what’s on the University’s mind. The issues of healthcare for our community, including its most disadvantaged; and education of our next generation of healthcare professionals in our public University are intrinsic to the University’s obvious but secret plans. I believe our community has a right to know what is going on. Does anyone disagree?