The matter of compensation to UofL President James Ramsey that tipped public opinion of the University in a more critical direction is back in the news.  Both Chris Otts of WDRB and Andrew Wolfson of the Courier-Journal reported yesterday on the release by the University of Louisville Foundation of its Form 990 Federal Tax Return for 2014.  The University knew it would not be pretty and began to prepare the way with letters to supporters and posts to various social media.  Pretty it was not– except for Dr. Ramsey and his senior supportive staff.  Numbers taken directly from the compensation pages of the return listed President Ramsey’s salary from the Foundation alone as $2,428,886 with additional benefits of $362,500.  His compensation included tax “gross-ups” to make up for any personal income tax he would have to pay.  A great deal if you can get it, but not offered to most faculty or staff!

Even before the ink hit the page, Foundation Chairman and former UofL Trustee Chairman Robert Hughes broadcast an email to the UofL world at large highly critical of Mr. Otts.  He accused Mr. Otts him of missing the point, vastly overstating Dr. Ramsey’s salary, having an agenda, and misleading the public with fairy tales.  (I am accused of much of the same by the University’s internet trolls.) In my experience,  Mr. Otts and Mr. Wolfson are both knowledgeable and careful reporters.  If they have an agenda, it is in providing accurate and relevant information to their public.

Dr. Hughes restates his support of Dr. Ramsey with the same boilerplate arguments we have been hearing for months: the state is withdrawing its financial support, we are graduating more students, some of these are getting prestigious awards (but not nominations to Phi Beta Kappa), and we are no longer a commuter school having built many dormitories (and required freshmen to live in them).  Dr. Hughes claims that these successes are directly linked to the key strategy of retaining the leadership of Dr. Ramsey and his executive team (other than the ones under FBI investigation, recently out of jail, or who have resigned or were fired and who have made claims of administrative malfeasance against the University that are still being adjudicated in the courts).  Nonetheless,  I suspect that the loyal and hardworking faculty  and staff would like to think that a lot to do with the University’s successes too!

Executives and coaches more important than students?
I will grant that Tax Forms 990 are difficult to understand for the first-time reader. Messrs. Otts and Wolfson are not novices like me.  I naively assume that the numbers mean something. If we are told that the compensation numbers do not mean with they say, what do they mean?  Am I to assume that the $6.9 millions of scholarship money awarded by the Foundation is not accurate either?  To me, this Form 990 says that more money is paid in compensation from the Foundation to a small handful of its senior executives than is given to students as scholarships.  Please explain to me and our students why I am wrong.

What about research?
Dr. Hughes does not mention research as a measure of the success of Dr. Ramsey’s presidency. I wish I was independently able able to report about research progress but such information is closely held and I am worried that not all is as rosy as we are told.  MetaCyte, Inc., a major commercial research initiative of the University, did not meet expectations and was terminated.  The Form 990 we are discussing here lists income of only $1.2 million from Nucleus, the University’s current highest profile commercial research entity.  Is research money flowing into University or other coffers in some other way that is not apparent?  Is all of this proprietary?

One objective measure of research activity.
Funding from the National Institutes of Health has long been the gold standard of research success for Medical Schools and Universities. In the 1990s I began to collect information for the University about its standing in this regard.  I will use this occasion to update it for my readers. (I prepared an interactive map NIH funding by state showing NIH funding to Medical Schools in 2015 by state.)

UofL’s School of Medicine’s experience in the graphs below is depicted in red, and that of the University of Kentucky in blue.  The numbers come directly from the NIH website.  The dollar amount of NIH funding has not increased in the last 10 years and the actual number of grants has actually been declining.  Our rank among other schools of medicine is no higher than it was in 2003.  Is it proper to argue that our success in obtaining NIH grants in the School of Medicine has fallen under the tenure of Dr. Ramsey? 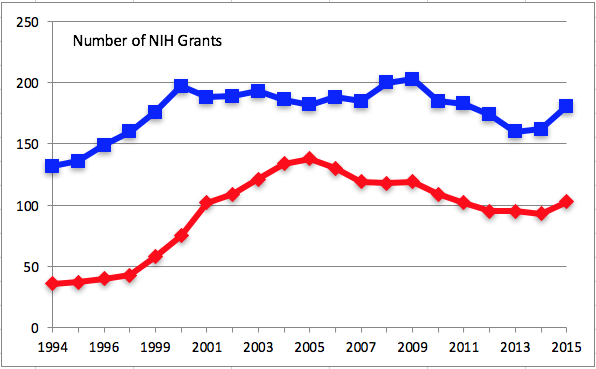 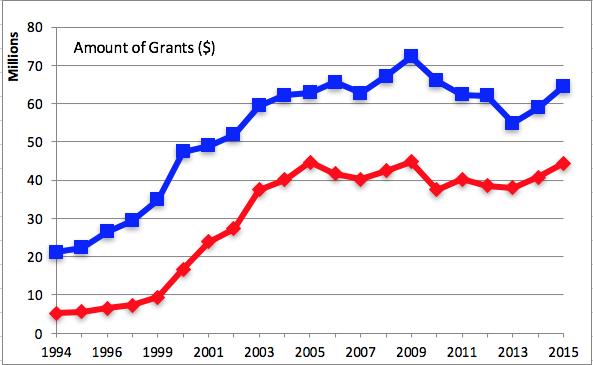 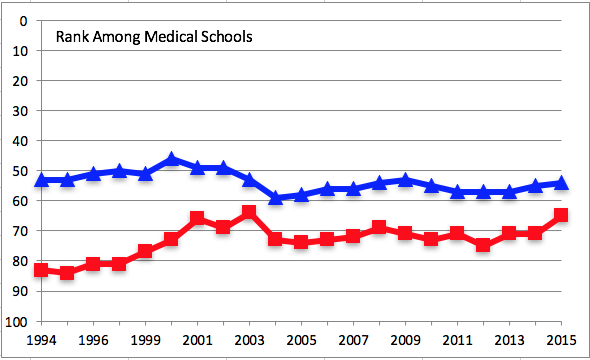 Reaping what has been sown.
The University has been very stingy or worse about how much information it is willing to reveal to its public.  In my opinion, that posture has only gotten it into trouble. If our public University is unwilling to be fully accountable and appropriately transparent to its constituency, it has no basis on which to be critical of those who try to honestly hold it to those standards.  Dr. Hughes and the University cannot have it both ways. Name-calling of either Trustees or reporters who ask for accountability is an inappropriate defense.