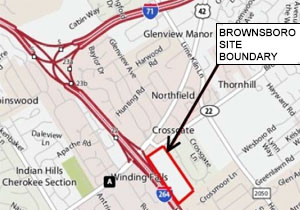 In late June, it was announced that after more than 10 years of planning and maneuvering, the Veterans Administration in Washington made their final selection of a site on which to build a replacement Veterans Hospital for the current outdated inpatient facility on Zorn Avenue. There is no news about what will be done with the current Robley Rex facility or the land it sits on. Perhaps that is part of the deal. The new location at Brownsboro Rd. and the I-264 Watterson Expressway is not a surprise, having been the favored site for some time.

I hesitate to use the word “final” because the land has not yet been purchased and there is still a formidable panel of influential people who have been fighting for a downtown (or other) location for a long time and are unlikely to give up. Senator McConnell who has been in office for the duration, and our current Representative John Yarmouth, who has not, have pointedly stated publically that they have not tried to influence the final location, only the rate at which the decision has been made. This was a pleasant surprise to me, as I was a lobbyist for UofL in the early days of the process and can confirm that the University lobbied hard at all levels to build a new facility of some sort adjacent to its downtown hospital and was accustomed to receiving earmarks and favors.

If they could not stay where they were, the veterans themselves were overwhelmingly opposed to a downtown location for the predictable reasons including traffic, safety, urban confusion, and the loss of their identity as a community of veterans. I have not been shy in also expressing my preference for a suburban location for the new hospital. The University, Louisville politicians, the Courier-Journal, and the business community strongly favored a downtown location because it fit into their business plan of using health care as a principal engine of local economic development. For my part, I believed the University had been taking advantage of the VA for many years, and had lost their right to have yet another captive population of patients– teaching and research material in the usual terminology. I favored allowing the very best health care professionals and institutions in Louisville serve this population whether they were part of the University enterprise or not.

I spoke with a representative of the Robley Rex Medical Center last week who told me that in the end, the decision was based on the fact that it was just too extensive, and would have taken too much additional time to try to build downtown. Multiple issues including eminent domain, dealing with multiple current property owners, costs of relocating businesses and other tenants, site preparation and the like were overwhelmingly in favor of the Brownsboro Rd. site. Nonetheless, the veterans were promised that their opinions would be heard and no doubt they were. Even our elected representatives recognized that they had multiple constituents in this matter and would not be able to satisfy all of them.

I asked specifically about how the new hospital would be staffed. I was told it would be “business as usual.” However this gives the VA much more flexibility in selecting its medical staff than when I was still a VA physician. Since the late 1990s, the Veterans system has increased its salary and benefits structure to make it quite competitive for both compensation and lifestyle when compared say, to physicians hired by hospitals or other medical systems. Our VA has been hiring its own primary care doctors for most of that time because the University was unable or unwilling to fill that important need with its best doctors. More recently, Robley Rex has been hiring its own full-time hospitalists and surgeons, again because University doctors were unwilling to fill the bill. These were problems the Lexington VA Hospital had been having even earlier to the point that its University surgeons refused to go even to their adjacent VA Hospital. The Robley Rex Hosptal currently contracts out specialty services for veterans with specific needs such as cardiac surgery. Previously, these cardiac patients had been sent to Jewish hospital and University doctors, but the current contract is held by Norton and is up for open reconsideration soon. I suggest that the VA add cancer care to their list of services to shop for. It warms my heart to see the privilege of serving our veterans on the basis of quality and efficiency having to be earned. Right now, the University is the local loser in both those categories. Facing up to a responsibility to do better can only help ensure the best possible care for all the citizens of Louisville– rich or poor, veterans or not.

Addendum July 11.  The VA purchased the land according to announcements on July 10, 2012