Counting Angioplasties:
Too many, too few, or just right?
Although it is St. Joseph London Hospital that is taking the heat in Kentucky over accusations of performing medically unnecessary cardiac catheterizations and other invasive cardiac procedures, it is certainly not alone nationally in this regard. I examined publicly available health data from the Kentucky Hospital Association (KHA) website which confirmed that St. Joseph London was performing a lot of cardiac catheterizations and other invasive cardiac procedures for such a small hospital in a rural part of our state. The hospital today claims to perform over 3000 heart catheterizations a year, although not all are angioplasties.  Of course, absolute numbers alone do not indicate that anything improper occurred, However, given the nature of the accusations, the precedents elsewhere, and in the best interests of both the hospital and the patients it serves; it is my belief that a careful and transparent review is in order. [Addendum:  We can now be sure that very much that was improper occurred!]

One of the more troubling observations to me is that between 2009 and 2010, when it is my understanding that St. Joseph London Hospital came under federal supervision, the frequency of its most commonly performed stent-angioplasty procedure dropped by 37% percent. At least one of three or more possible explanations has to be considered. The first is that medically unnecessary procedures were being done. A second is that medically necessary procedures were no longer being done. A third, and as equally undesirable an alternative as others, is that the collection of healthcare data for quality and utilization purposes is unreliable.

In my opinion, equally of concern as the sharp drop in number of procedures at St. Joseph London, was the even more dramatic increase in the number of coronary artery catheterizations and angioplasties statewide. In the single year between 2010 and 2011, the number of the most commonly reported angioplasties in Kentucky  increased from 12,803 to 22,688, a 77% increase. What happened? Did more cardiologists become employed by hospitals? Was the public previously being underserved? Was there some change in the way healthcare information was coded and collected? Was there something bad in the water? This change is so dramatic that it begs for an explanation– indeed, I demand one from people with the appropriate independence and expertise. To do anything else is to hide our heads in the sand. [Addendum May 24, 2018:  In fact, the jump in angioplasties in 2011 was due to a systematic error in the KHA database that doubled the number of these procedures.  After I notified the KHA, the error was corrected.  I redid the tables and graphs in these pages, but overlooked this article.  In summary, in 2011, the rate of coronary angioplasty in Kentucky continued to decrease gradually.  Half of the statewide decrease could be attributed to the major drops in procedures at St. Joseph’s and Kings Daughters Hospitals.]

County Map of Frequency of Angioplasty.
I have used medical utilization and cost data from the KHA before. Its website provides an interactive portal to much of the information collected and analyzed by Medicare, and by the Agency for Healthcare Research and Quality (AHRQ). Governmental and private organizations that evaluate quality and safety rely on this data. Buried in the capabilities of the KHA site is the ability to present some data geographically. Here is such a map showing how many people living in each of Kentucky’s counties underwent a Percutaneous Transluminal Coronary Angioplasty (PTCA) in 2010. This is the most common invasive cardiac procedure in Kentucky and is used to prevent and treat heart attack. A narrowed main artery of the heart is expanded from within with a balloon, usually leaving a supportive mesh or stent in place to keep the artery stretched open. Lifelong blood thinners may be needed. Angioplasty should never be used on normal or less than critically diseased arteries. 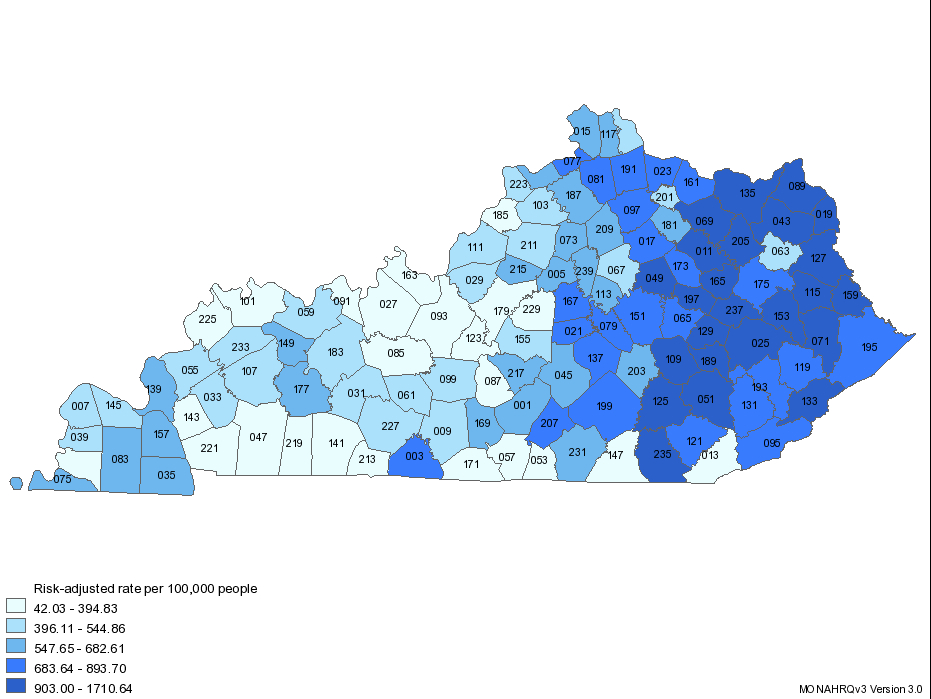 In this map, the darker the shade of blue, the greater percentage of people living in that county having had an angioplasty in 2010. The differences among the counties is staggering. It ranges from a low of 42 people per hundred thousand in a single year, all the way up to 1700 per 100,000– a 40 fold difference. In the counties with the highest rates, between 1% and 2% of the population underwent the procedure in a single year. (At that rate, 18 of every 100 people would have had an angioplasty in 10 years– almost one in 5 people!)  Frankly, given that such a result for almost any healthcare service in any state or region is the rule rather than the exception, no one should be surprised at this small area variation– only its magnitude. When I was medical director of a large managed care organization, we documented that some doctors and hospitals had a much lower threshold than others for doing invasive procedures in patients with chest pain.

It is important to emphasize that these rates are based on where people live, rather than where they go to the hospital. Thus, although the hospitals of Jefferson and Fayette counties are among those performing the highest number of procedures in the state, the citizens of those densely populated counties are less likely than average to have the procedure. Indeed, it is certain that people from other counties come to the big cities for angioplasty.

Laurel County (Labeled 125) where St. Joseph London is located (click on the map to enlarge it) is squarely within the highest quartile, but it and it’s adjacent counties do not have the highest rates. By raw numbers alone, Laurel Co. has the 20th highest rate. When an attempt is made to adjust the rates for overall severity of illness in the county, its rank rises slightly to 18th. The counties with the very highest rates are in central and northern Appalachia. I cannot explain this distribution, but in the interest of public health, and even in fairness to St. Joseph London Hospital, I would like to be able to.

You can download a PDF file with the relevant numbers, or contact me for the full report.

The Big Picture.
The most obvious, and even stunning observation from this map is that Eastern Kentucky is an angioplasty factory. Must we conclude that the citizens of Appalachia and Eastern Kentucky are sicker than the rest of us? We should include this possibility, but that would not provide the only, or perhaps even the major explanation. I have been observing the practice of medicine in Kentucky for almost 30 years. It is my belief that a major, perhaps even the major segment of the economy of Eastern Kentucky revolves around the getting of disability and the keeping of disability. As other industries such as coal and tobacco have faded in importance, the pursuit of disability, medically justified and not, has drained away resources from medical services into an ersatz unemployment and social support program. The very first such map like this that I created in the early 1990 showing the distribution of people receiving Medicare disability was essentially identical to the map I present above.  It does not help that the health care industry is viewed as an engine for economic stimulus there and elsewhere in the state.

Am I implying that unnecessary cardiac catheterization and other medically unnecessary services are being tolerated at the altar of economic development, or that outright fraud is occurring?  In my opinion, to some degree, this is true. In medical reviews I have done for the Board of Medical Licensure and in other legal proceedings, I have observed what was in my opinion collusion between doctors, lawyers, and patients to obtain disability and medically unjustifiable medical payments. However, let me be absolutely clear that I do not wish to imply that the people of Eastern Kentucky are morally distinguishable from the rest of us, or that their healthcare professionals are more or less professional. Our friends and cousins in Eastern Kentucky have had an uphill struggle for many years. I believe additional subtle yet powerful forces are at work, not altogether different from those that make prescription drug-abuse such a problem in Eastern Kentucky. That discussion is beyond the scope of this missive.

I did not have to read “Night Comes to the Cumberlands,” by Harry M. Caudill to recognize the influence of the business of disability, but it explained a lot. A culture has evolved in which being sick or just having a diagnosis of being sick is a gateway to economic security for people and professionals alike. Some patients, doctors, hospitals, and lawyers wittingly or unwittingly support that process. Doing medially unnecessary diagnostic testing and treatment is part of that culture. It is also good for business.  We medical professionals control the giving of diagnoses and serve as the initial gatekeepers to the status of disability. It is easy to fall into the trap of wanting to do everything and anything to help our patients. Even when we try to do the right thing, the rules we have to follow do not always make medical sense. For whatever reason, having a medical diagnosis of coronary artery disease is a trump card to play in support of a disability application. Is this explanation of the tremendous regional variation in Kentucky for a single medical service as simple or as easy as I might have made it seem? Of course not. But in a culture where being sick can provide so much secondary gain for so many, who would dismiss my premise altogether? Additionally, understanding what is happening in that far-away part of the state is relevant for us in the big city that has pinned its economic future on the healthcare industry.

Who can give us good advice or insight? Do you agree? How far off the mark am I?  Obviously, if I have made an error in presenting or interpreting the the data, please feel free to leave a comment to this posting.

2 thoughts on “Bad Hearts, Bad Healthcare, or Both in Eastern Kentucky?”