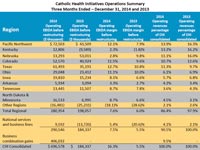 CHI’s report shows immediate favorable impact of acquisitions on current financials. Productivity and sustainability of existing operations harder to ascertain.
Catholic Health Initiatives (CHI), the parent company of KentuckyOne Health, released its most recent quarterly financial report earlier this month covering the three months ending December 31, 2014.  The company’s press release stressed “improved second-quarter financial results as the organization continues a comprehensive program of operational improvement, revenue enhancements and strategic expansion in key markets.”  Raw earnings in this second quarter were $290.5 million compared to $132.1 million in the same quarter a year earlier. Operating income moved into the black following the losses of the first quarter.  These gains were attributed to “additional business acquisitions, clinical and operational improvements as well as other internal cost-saving programs to reduce expenses.”  However, these “turnaround” earnings are entered before being reduced by a variety of adjustments including interest, depreciation, amortization, business combination gains, and “restructuring.”  This makes it difficult for the uninitiated such as myself to judge whether this apparent reversal of fortune represents on-the-ground improvement in existing competitive markets, or the untested effects of an expanding acquisition bubble. The bond market that supports the considerable debt of the organization, and CHI’s continuing success in a rapidly changing healthcare environment will provide a more definitive judgment. The full report is available here.

How did they do it?
According to the notes in the report: “CHI experienced improved operating results across most regions for the three months ended December 31, 2014 as a result of continued strategic performance improvement initiatives including focused clinical and operational initiatives across the enterprise, targeted growth initiatives at the regional level, revenue cycle improvement initiatives through its relationship with Conifer, the incremental impact of the strategic affiliations discussed above, and by initiating a comprehensive cost reduction strategy to identify opportunities for expense reductions. Among the actions to reduce expense included the completion of a workforce reduction of approximately 1,000 positions across CHI in January 2015. Excluding business combination gains, the strategic affiliations completed in fiscal year to date 2015 and in fiscal year 2014 contributed operating revenues of $400.4 million and $100.5 million, and Operating EBIDA before restructuring of $50.5 million and $9.7 million, for the three months ended December 31, 2014 and 2013, respectively.”  Frankly, I can’t tell what happened. The table below provides additional detail broken down by 11 market regions. (Click to enlarge.)

Some regions are obviously doing better than others but for different reasons. Improvements in Texas were driven by acquisitions, and in the Pacific Northwest by greater patient utilization. Nebraska had a sharp drop in earnings because some of its facilities there could not reach contracts with the Blue Cross/Blue Shield of Nebraska network–   an example of the potential clout major insurers have over hospital and other providers.

How about Kentucky?
According to the unadjusted numbers presented, Kentucky moved from the red into the black.  The Commonwealth remains a major region contributing 13.2% of national operating revenues– second only the the Pacific Northwest.  However, its operating margin of 2.3% is the lowest for all regions including Nebraska. It is probably fair to say that Kentucky remains as one of the financial weak sisters of the organization. Ongoing local reports of KentuckyOne Health’s operations sustain my concerns about stability of operations locally.  Here is what CHI had to say about the apparent financial improvement in Kentucky.

“The Kentucky region has begun to show improvements in operations and stabilization in Operating EBIDA as a result of an ongoing strategic and financial turn-around plan (referred to as Strategic, Operational, Repositioning and Transformation (“SORT”)).  SORT activities are focused in three major areas: growth, revenue improvement and expense management, which includes reducing labor expenses to better align with patient volumes; reducing supply chain expenses; improving physician enterprise profitability; and other clinical and operational improvements.”

I would have to ask Dilbert for a translation.  These comments confirm that employee lay-offs have occurred in Kentucky, but the absolute number and nature of employee reductions were not released by KentuckyOne, at least not to my request.  Total national labor costs still make up 47.6% of total operating expenses.  Despite two rounds of nation-wide lay-offs, CHI Reporting Group total labor costs were 11.3% higher than in last year’s second quarter.

Boots on the ground vs. expansion bubble?
I cannot determine how much of the improvement in the reported financials is due to acquisitions and expansion, or due to improvements in market share in existing operations.  An expanding industry is only as good as the foundation under it.   CHI does report selected same-store utilization numbers which “exclude the impacts of current and prior year acquisitions.”   As in earlier same-store reports, these numbers do not seem very rosy to me.  While net patient service revenues increased 2.7%  (80.2 million) over the three months compared to last year, this was due to rate increases, not patient visits.  Compared to last year’s quarter, services actually decreased in virtually every category: Acute Admissions 1.5%, Acute Inpatient Days 0.9%, Inpatient Surgeries 1.8%, Inpatient ER Visits 0.8%, Outpatient Non-ER Visits 4.4%.  Even the Outpatient Surgeries that are replacing inpatient surgeries nationally were down 6.0%. The only increase in reported same-store utilization was a 6.3% increase in Outpatient ER— visits that a healthy healthcare system should be trying to minimize!  Against this falling same-store utilization was an unadjusted 3.0% increase in operating expenses.  This cannot be a good thing!

Legal proceedings.
Some items in past reports remain, such as the federal and civil matters at St. Joseph- Towson and St. Joseph-London related to abuse of certain cardiology procedures. These are not thought to have a material adverse effect on the financial position or results of operations of CHI.  While that may well be true for CHI nationally, the operations at St. Joseph London have certainly been affected to the extent of closure of some cardiology services that were major revenue producers.  During the reported quarter, CHI also reached an agreement with the U.S. Department of Justice related to hospital charges for implanted cardio-defibrillators. I suspect there is not a hospital in the country that is not now looking with much care on how they provide and bill for cardiology services– as they should!

The new item on the legal list relates to pension plan litigation.  CHI and individual employees are being sued in a challenge to the “church plan” status of its employee benefit offerings. Organizations claiming religious exemption from having to follow the Employee Retirement Income Security Act (ERISA) have a financial advantage over non-church companies. Simply put, CHI does not have to follow the same rules as most other businesses..  Management does not think that even if decided adversely to CHI that there would be a material adverse effect on its financial position or results of operations.  I have often stated my opinion why using church rules to run public healthcare institutions is antithetical to contemporary medical practice. CHI uses its profits to further its faith-based mission.  In the interest of non-discriminatory public healthcare policy, I believe CHI should lose this one.

Wrap-up.
KentuckyOne Health is a major provider of Healthcare in Kentucky. Large numbers of Kentuckians– some with limited other choices– are dependent on the financial health of KentuckyOne for their own physical and emotional health.  Therefore the real significance of the numbers in this report is important for Kentucky.  I do not pretend to fully understand such complex financial reports, but some of the elements within that I can understand are troubling to me.  Is KentuckyOne’s patient utilization or market share falling in the state?  I have no information about same-store utilization in Kentucky, but in my opinion, at least here in Louisville, KentuckyOne and the University of Louisville are still struggling to capitalize on their new affiliation. I am told that in at least two of their acute care hospitals, whole wards are shut down.  At least one KentuckyOne hospital has had troubles in the past being included on the hospital network of a major health insurance company. The experience in Nebraska shows what can happen when a provider network becomes less competitive in a market where cost and quality both count.

CHI is not alone in the hospital and healthcare business world in grappling with revolutionary changes in the way healthcare is provided, or in attempting to predict what the future will look like.  I have commented before about the inevitable bursting of our present healthcare bubble.  CHI appears to me to be harnessing its future to continuing acquisitions and an ever-larger and more comprehensive system. It hopes to become a major health insurer in its own right.   Perhaps that strategy will work for it– certainly CHI is not alone in taking this approach.  The results are not yet in, and no one can predict what a post-bubble world will look like, but the stakes are high for all of us.

If I have made an error of fact or interpretation, please bring it to my attention.  I invite KentuckyOne to contribute its specific employment and utilization statistics for the reported quarters to flesh out the national report in these regards. How are we doing?