Catholic Health Initiatives (CHI) released its Annual Report for Fiscal Year 2017 last week. Given that the company is in the middle of discussions with Dignity Health about a possible merger or alignment, and the attempted sale of half of its hospital beds in Kentucky, the report is of considerable interest. I cannot pretend to understand the arcane rules of accounting underlying the numbers and discussion in the report. Others in a position to do so emphasize the increasing $585 million loss in operational income from the company’s core healthcare business, and the considerable outstanding debt of $8.7 billion. There is a reason that bond rating agencies have been downgrading CHI’s rating and assigning a negative outlook. What I intend to do below is to highlight material from the report that is specific to Kentucky, to offer a few general comments, and to ask my readers to help us interpret what is at stake for Kentucky.

Earnings Before Interest, Depreciation, and Amortization (EBIDA).
CHI uses this method of accounting to present much of its financial numbers. EBITDA is (according to Wikipedia) “not recognized in generally accepted accounting principles” but intended to allow comparison of profitability between different or heavily leveraged companies. [The ‘T’ in EBITDA is for taxes, which are less relevant for a non-profit.]  It has been suggested that “EBITDA doesn’t give a complete picture of a company’s performance.” and that because it is not defined in GAAP, “companies can report EBITDA as they wish.” Furthermore, CHI lists its EBIDAs “before restructuring, impairment, and other losses.” In short, I have no confidence in my ability to interpret the financial health of CHI from this report. Can anyone help us?

Items Specific to Louisville.
From the 127-page document, I extracted all paragraphs in which Louisville (or Kentucky) is mentioned, along with the page number from the original document. A lot is stuff we already knew here in Louisville. There is a good bit of repetition, boiler-plate, and business-speak language that seemed not very specific or informative to me. Maybe that is the nature of annual reports. Allow me to highlight (in sequence) some of the mentions.

Purchase of the Financial Interest of a Foundation for $150 million.
This buy-out was necessary to give CHI/KentuckyOne Health a free hand in their attempt to sell the majority of facilities in Louisville. What the Jewish Heritage Fund for Excellence choses to do with the money is a wild-card in the fallout from the sale (or failure to sell) Jewish Hospital.

Intention to Sell KentuckyOne Facilities.
Both inpatient and outpatient facilities are on the sales-block. Using the bed counts provided in the Report, CHI is offering 51% of its inpatient hospital beds for sale. Of the beds not offered for sale, nearly one third are in the Our Lady of Peace psychiatric hospital in Louisville. Clearly the remainder of facilities CHI hopes to retain will be a drastic reduction focused in Lexington where it would face stiff competition from an ascendant University of Kentucky. Several of the retained hospitals are small rural Medicare critical access hospitals that still receive cost-plus reimbursement from Medicare, but are under the same financial stressors as other rural hospitals. (CAH hospitals are limited by law to 25 beds, mostly overnight admissions, and they must transfer out really sick patients.  This is the best many areas in Kentucky have.) That KentuckyOne’s financial future will be better after its attempted sale remains an unproven assumption. 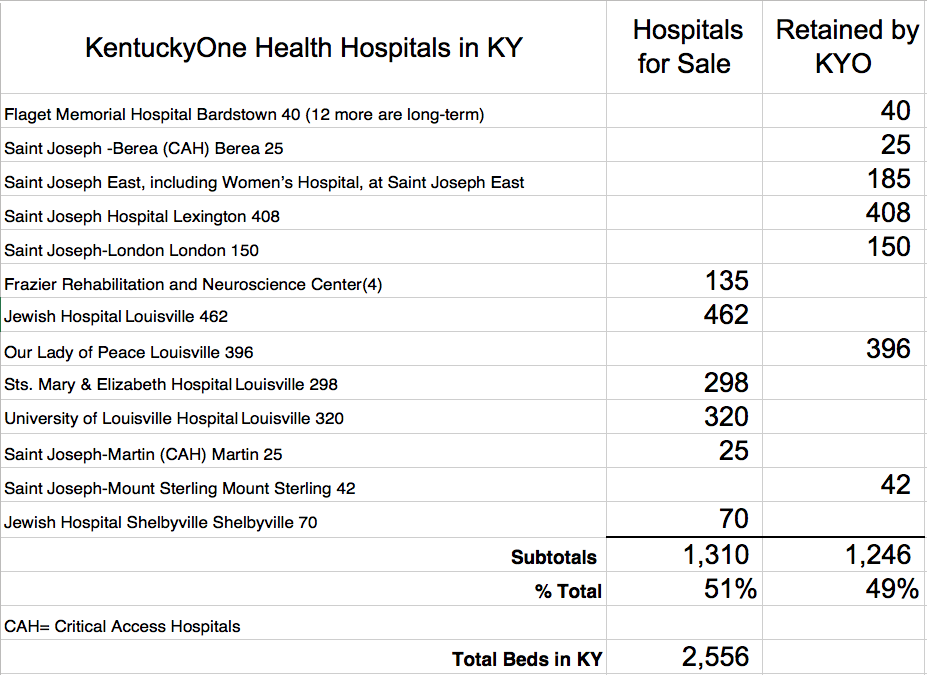 Timing of the Sale of Louisville Facilities.
The report repeats CHI’s statement that it anticipated closing on the sale by the end of calendar year 2017. The progress of the attempted sale has been masked with military-grade secrecy.

[End of Louisville-Specific Comments.]
The above comments summarize all mentions of the word “Louisville’ in the report. Additional more numerous mentions of the word “Kentucky” are highlighted below. These include summaries of the challenges faced by KentuckyOne and its attempts to deal with them. Kentucky and Texas are identified as the weak links in the CHI network. It seems to me that the challenges for KentuckyOne are the same facing the hospital and healthcare industries in general. Not all are having such trouble.

Losses in the Physician Enterprise.
CHI employs many physicians and disclosed a total operating loss of $719 million for FY 2017 in this segment of its business. [I don’t understand.  How can this be greater than the reported overall Operational Loss of $583 million?]  CHI is laying off physicians in Kentucky and elsewhere but apparently anticipates further losses as a “strategic investment.” This seems like a lot of money. If both your hospitals and medical professionals are losing money for the company, what does that say? CHI hopes to better manage the balance of its physicians and specialties.

Debt– Including a Large Amount in Kentucky Bonds.
The total debt for CHI is $8.7 billion. Of that, $6.59 billion is long-term debt. If I understand the terms correctly, the total amount of service requirement (annual payments of interest and principal) on long-term indebtedness is $422 million (p.40). This is more than the $396 million in FY2016.

From the list of outstanding bonds that were part of the Report, I extracted those issued under the authority of the Commonwealth of Kentucky or Louisville/Jefferson County. The 9 separate bond offerings totaled over $703 million! I do not know how much of the additional CHI debt is attributed to its Kentucky operations. Who can help us understand what this means to Kentucky, CHI, and a potential buyer?  What must Dignity Health be thinking about this additional debt burden?  Blowing the bubble bigger may not be the best strategy for either company.

Surely the amount of Kentucky debt is relevant to the attempted sale of KentuckyOne’s facilities. Who can tell us who is responsible for the debt in the event of sale or default? The city or state taxpayers? How much of the debt would a potential buyer have to shoulder? Presumably this would be in addition to the cost of deferred maintenance to the Louisville facilities that I understand to be in the hundreds of million dollars. This amount of additional investment, the current chaotic political downtown medical center situation, and the intense competition that an out-of-town buyer would face from existing Louisville acute-care hospitals makes me skeptical that CHI/KentuckyOne will be able to sell its Kentucky assets as a block containing the Jewish and Sts. Mary Hospital complexes. In the current national scene, for-profit hospital chains are selling hospitals, not buying them!

What will happen?
Short answer– I do not know. It is my clear understanding that KentuckyOne had put Jewish Hospital on the market before without success. I suspect that the list of potential current buyers has shrunken to few or one, but my understanding is based on doctor’s lounge gossip or fears. I suspect we will find out very soon. I will be surprised if CHI/KentuckyOne is able to enforce its intent to sell its selected Kentucky assets as a single block.  [I make my usual Martini bet that they cannot. Your or my choice of drink and Louisville bar to the first three takers.]

What is clear is that something is going to happen (or not) that will have major repercussions for the healthcare landscape not only in Louisville, but in the Commonwealth as a whole. I do have ideas of how I would wish things to turn out, but I reserve those for another article. Feel free to share your hopes or dreams for an acceptable aftermath of the demonstrably unsuccessful UofL/KentuckyOne collaboration in either the public comment section below or confidentially.

As always, if I have made an error in fact, please help me correct it.