I have been writing articles for this health policy blog since 2009– almost all of the 390 posts since 2011. Of them, the one most frequently accessed by the public is a 2012 article titled “Horse Liniment for Your Arthritis and Healthcare Reform.”  I encourage you to read it also, because it provides my background for this article, and explains why I write a lot about how pharmaceutical companies – with the active consent of our elected government officials – are gouging the public. The earlier article caught my attention because of a tiny advertisement in the Courier-Journal notifying me that an “arthritis pain mystery” had been solved and that the secret was horse liniment. In my studied professional opinion, the claims were vastly overblown and that in any event, the “secret” was not a secret at all. The ingredients in the horse liniment were available in a variety of over-the-counter joint-rub-ons at a fraction of the cost of the “miracle” liniment offered for sale. I lament the fact that the public at large could be motivated to part with their money in such a way, but alas, physicians are equally as vulnerable to bamboozlement by the traditional pharmaceutical industry– think OxyContin. Sadly, the marketing approaches I wrote about in 2012 are still alive and well. Such advertisements in the Courier-Journal are now bigger and more numerous than ever.  A recent such sparked today’s article.

I truly mourn for the declining printed newspaper.
In my long-ago youth in Connecticut, I was a paperboy who delivered the Hartford Current in the morning or the Middletown Press in the afternoon. I developed then my lifelong habit of reading a newspaper page by page from beginning to end. When I came to Louisville in 1984, I became a reader of both the Courier-Journal and its now defunct afternoon sister, the Louisville Times. I am still a loyal reader of the Courier-Journal even as the numbers of its pages and staff continue to dwindle, or as news items in the printed edition appear days after they do on the paper’s intrusive website or on other news outlets. Nonetheless, the C-J continues to give us hard-hitting investigative journalism and useful information about our region. In the context of this article, I have noticed that as the number of pages decreased, the number of black-bordered, half-page advertisements for a variety of medical offerings increased proportionally. These have in common the characteristics of my index horse-liniment advertisement. These are advertisements that begin by promising you things your doctor doesn’t want you to know about, or which drug companies are hiding, which occasionally mention the word cure or miracle, provide glowing testimonials from one or a few users, emphasize limited availability, provide a phone number, and so forth. You have seen these all over the printed and digital world and know what I am referring to.  A surprisingly large number of these relate to arthritis or musculoskeletal pain.  At the end of virtually all the usual ads is some boxed text in tiny print advising the potential customer that the statements made have not been reviewed by the US Food and Drug Administration; and are not intended to diagnose, treat, or prevent any disease. At least that part of most such ads is usually accurate.

I wish I had something like this when I was still practicing.
The latest ad that sparked this follow-up article is one proclaiming a “new arthritis pain killer [that] works on contact and numbs the pain in minutes.” The preparation is named Apeaz. It is rub-on-cream that is said to “numb the nerves right below the skin” delivering “immediate relief that lasts for hours and hours.” [It is not clear to this rheumatologist how numbing nerves right below the skin can have much direct effect on joints deep below.]  The “powerful painkilling effect is created by the creams [sic] active ingredients, three special medical compounds” which are unspecified. The prominently identified “Paid Advertisement” is presented in the format of a medical article from the “Associated Health Press.” As I had never heard of Apeaz, the identified news organization, or the company producing this new arthritis treatment, I tried to lean more. Not much was available to me. The only other product of the Associated Health Press I could find was another advertisement like this one.

Available on Amazon.com.
Surprisingly, my best source of information was Amazon.com where I was offered a 2 ounce tub of Apeaz for $45. The active ingredients were revealed as the same over-the-counter ingredients of camphor, menthol, and methyl salicylate which are present in Bengay and related joint rubs. In fact, BenGay contains even higher concentrations of the latter two ingredients. At my local CostCo, I can buy 8 ounces of Ultra Strength Bengay for $9.79, or $1.22 per ounce. On Amazon, Apeaz at $22.50 per ounce costs almost 20 times more! Based on everything I have been able to find to date; my professional opinion allows me no reason to believe that Apeaz is any better  for musculo-skeletal pain than Bengay. If you want something that gives you a nice, warm, aromatically-enhanced feeling when massaged over your joints or sore muscles; Bengay and its cousins offer a low-, but not no-risk approach. Just be careful, read the packages, and wash your hands after applying before touching any sensitive areas of your body!  There is a reason that these ingredients are characterized as “counterirritants” or “rubefacients (red-making).” This is the same kind of stuff that was sprinkled on the jockstraps of abusing football players as part of the pay-back in the movie “Revenge of the Nerds.” Don’t let that to happen to you. 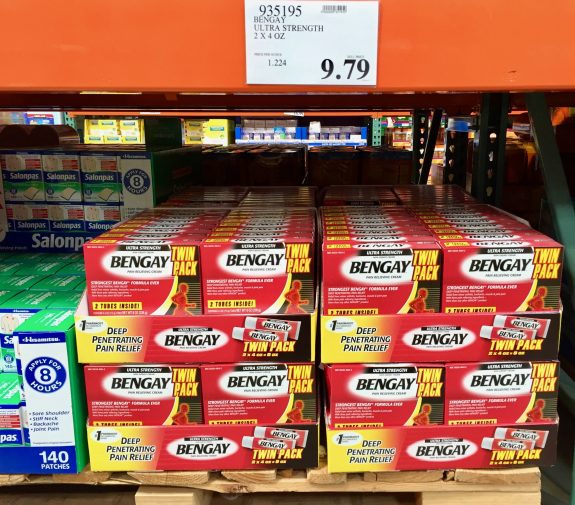 Why pay more?
I have no reason to believe that Apeaz is any less effective than Bengay, but why pay more?  That is the message I want to convey here. Neither of the products discussed above are going to materially effect the natural history of arthritis any more than hot-water bottles and massage.  In many if not most areas of medicine, more expensive does not equate to better. Indeed, less medicine is often the best course to follow.   As a society, we have a hard time grappling with these concepts. When concerns are posed about the effectiveness or value of their products or services, vested interests often push the hot-buttons of “death panel” and “rationing” to keep their income flowing.  As a former medical director of a health insurance company, I view the recent abolition of Medicare’s Independent Payment Advisory Board as a particularly bad omen in this regard.  In a world of infinite demand for medical services of uncertain, minimal, or no effectiveness; and a limited pool of funding to pay for it; it is often both correct and ethical to just say no!

Newspapers do not have to accept all ads… do they?
I have been in Louisville long enough to see the Courier-Journal bow to complaints by its family-friendliest readers by removing advertisements for sex-talk telephone services, in-depth personal massages, escort services, and the like from its pages. In my opinion, ads like the ones I am writing about here are more objectionable than the sexy-talk ads. Even as I was writing this article yesterday, I received a letter from the Courier-Journal informing me that the monthly cost of my delivered print subscription will now be $70. It may be that the Courier-Journal is existentially desperate for advertising income, or that it is following the mandates of its parent, the Gannett Company . If it’s business model depends on accepting ads like these, maybe it is time to shut down the presses. In my opinion, ads of any origin that mislead or which exaggerate medical efficacy are a kind of fake news that causes real damage to real people.

As is my customary posture, if I have made an error in fact, I want to correct it.  I would be pleased to review for these pages any scientific medical publication with findings that are contrary to, or which would rebut my current opinion.  I am qualified to do so.  To the Courier-Journal– I have no plans to cancel my subscription!

One thought on “More Expensive Medical Services or Products Does Not Equate To Better.”