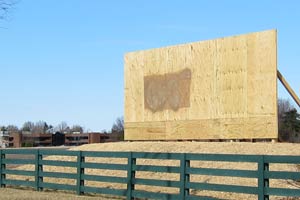 Actually, this is just my guess, or perhaps wish. Nonetheless, something is happening at one of the finalist sites for the new Louisville Veterans Hospital in Louisville. Over the past few weeks, ground preparations were made for the sign above. Today I noticed that the blank sign itself was erected. I am willing to accept a bet for a drink at your favorite bar that soon there will be a VA Hospital sign there.

Certainly if the Vets themselves had any say in the matter, the deal would have been settled long ago. I attended two major public hearings early in the selection process. Both were heavily attended by veterans and officers of veterans’ organizations. Except for a veteran or two who came with the official party from the University of Louisville and its Hospital, to a person they vigorously opposed a downtown location for the new hospital. One or two representatives of major organizations said they personally had no objection to a downtown hospital, but that their members were overwhelmingly opposed. The most common reason I remember was that they did not want to deal with the parking and traffic of downtown Louisville. They also like the thought and culture of a dedicated facility and staff of their own. They feared being farmed out to other downtown hospitals– indeed this possibility was part of the original planning.

The University and its hospital, and perhaps a partner hospital or two, lobbied very heavily and at the highest levels for a downtown location. They were able to convince the Mayor’s office to take their side. It was and still is big-time politics. The University’s reasons are pretty apparent: the VA is important to them. They desperately need the patients for their various teaching and residency programs. The University likes the faculty salary money that it gets from the government. VA salaries are “hard” money that can be used largely at the discretion of clinical chairmen. The University can place faculty there who cannot qualify for a regular Kentucky medical license. It likes the VA research money that has traditionally been easier to get than NIH money. It likes like having the captive veterans around on which to do commercial drug studies and other research. Like other hospitals in town, University Hospital would like to more easily subcontract for specialty services at its own hospital, or even take over some traditional Veterans Hospital programs. University Hospital by itself does not attract enough of some types of patients to support its training programs. It and the University would clearly benefit from another closer and captive group of patients. No matter where the hospital ends up, I expect to see some maneuvering for access to its patients.

Of course, should the VA move out to Brownsboro Rd. and the Watterson from its present location on Zorn Ave. nothing at all would have to change from current arrangements with the University. The nasty truth is that University faculty historically don’t like to have to go to the VA. It is certainly inconvenient to split your time between two places, but faulty have been splitting their time between University Hospital and other private hospitals in Louisville for decades. In my experience, faculty like the money and benefits, but would rather stay closer to their private offices, private hospitals, or laboratories. Interns and Residents like the VA precisely because there has been less faculty supervision there.  Nationally the VA has had to struggle for the accountability of its paid faculty. A few years ago the VA in Lexington got in trouble even though its hospital is adjacent to the main campus. My recollection is that at least one of its major departments refused to work there rather than fill out time sheets. Although the argument is made that a downtown hospital will insure more faculty supervision, putting the hospital downtown will provide no guarantee that University faculty will spend any more time in the VA then they have in the past. In fact, time spent might even be less because staying in a University office or lab until “needed” would be an attractive and easy option.

So, whose interests should come first? Are VA patients simply more fodder for the economic development of Louisville and its private investors? Whose convenience has a higher priority, the veterans and their families, or University faculty and trainees? Will the medical care of the veterans suffer if they are not forced to come downtown? Is there something the matter with the quality of care now? Perhaps with a suburban location the VA can improve its staffing by using more non-University physicians, perhaps even hiring full time ones? The VA outpatient clinics have hired away some of the best internists in Louisville from the private sector. Is the VA afraid that they have no choice than using University faculty and trainees to provide patient services? With all the other hospitals in town buying up medical practices, why not the VA?

Full disclosure: I am very fond of the VA system. I trained in VA hospitals and my first faculty job was in a VA hospital. I once was ready to accept a full time job in the VA Hospital Administration in Washington. I do not think I am blind to its strengths and weaknesses. I would like to see a brand spanking new facility for our Veterans in a place that says we value their wishes. I would like to see a facility where every physician in Louisville would be willing and eager to to contribute to the best possible care for veterans. In fact, a little more competition might be good for the place. In my personal experience, Medical Schools tend to take their VA hospitals for granted. I am personally hoping to see a new VA sign next to Brownsboro Rd., but my intrinsic and battle-worn skepticism whispers to me that the deal has already been cut for a downtown location. We shall see whether my optimism or cynicism is rewarded.

[Addendum: March 7. Today I noticed that the empty sign pictured above states that there will be a new shopping center on this site. A new VA will go elsewhere (or stay where it is). Several years ago the city administration wrote openly that the new VA was going to be built on the site it was clearing downtown. We will see if they knew more than the rest of us. I suspect there was a good bit of back-room stuff going on. Sad that I would so readily think so.]

[Addendum: May 20, 2011.  I attended the afternoon public forum on May 11 at which potential locations for the new VA Hospital were presented to the public. The handout provided by the VA can be downloaded from this site.  I will report on that forum elsewhere.  I was surprised to learn that the  land described above  (the old Hildebrand Farm at Brownsboro Road) remains as one of three new potential greenfield sites under consideration.  A quick look on the web confirms that the old Farm is being actively marketed for the leasing potentials indicated on the sign.  There are even architectural drawings of buildings!   Since even a single lease would likely rule out a presence of a VA Hospital on the site, I was puzzled.

I pointed out my confusion to one of the VA officers on the hearing panel who confirmed that the Brownsboro site was still in play.  This was confirmed  for me yesterday by a representative of Blue Properties, an owner of the land. Their marketing brochure with list of arguments in favor is attached. Since the VA site process has been plodding along for over 6 years now, one can hardly blame the owners for preparing for alternative outcomes.  For the time being however, I may still win my bet!]