Special interest  or public health issue?
I cannot conceive that any health professional would consider the incidence of death and injury from firearms as other than a public health issue. Surely the absolute numbers of people killed or injured (in excess of 100,000 per year); whether self-induced or by others; by accident or on purpose places the matter squarely before us on a regular basis no matter where we live. This uninterrupted endemic parade of victims is punctuated by epidemic outbreaks in crowded places like schools or workplaces.  There are carriers of this disease in all 50 states. No cure has emerged for this essentially American pandemic. The most recent outbreak which stimulated me to write this article occurred last month in Florida at the Marjory Stoneman Douglas High School in Parkland where 17 students were killed by another student, and 17 others wounded by an AR-15 military machine gun– a.k.a. assault rifle. The damage caused by this gun unnerves even hardened professionals.

Unlike most other epidemics of disease, reliable information about how to prevent non-military people from death-by-bullet is scarce because of a bizarre broad governmental prohibition to even study the matter. The self-censorship is deafening in a recent 476-page report from the U.S. Department of Health and Human Services.  It is titled, “Health, United States, 2016” but the words “gun” or “firearm” are not to be found in it. Disturbingly, it remains unclear that any meaningful national attempts to control this epidemic will be made or even that individual states will be permitted to do so.   Undeterred, advocacy groups are increasingly demanding that immediate and definitive action be taken to protect themselves and the rest of us. 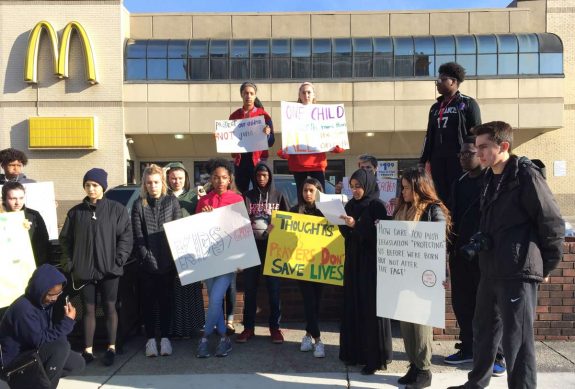 Our young adults step forward.
Last Monday evening, I unexpectedly met a group of students from St. Francis High School here in Louisville who had come out for a program of Kentucky to the World to hear Nobel Laureate and scientist Phillip Sharp talk about the value of education for individuals and our communities. In chatting with the students, I learned that they were planning to participate in the National School Walkout to protest against gun violence and to demand gun control. I was touched by their commitment, and as a father of former students of St. Francis how could I not stand with them?

Thus it was that at 10 AM on March 14, that the majority, if not all of the St. Francis’s students turned out in front of their school and with signs, speeches, and responsive chants demanded their elected representatives to cease with the BS and to do something.  I was moved!  I am realistically pessimistic that anything significant will happen soon, but it is clear to me how the students will judge who to vote for when they are able. I was immensely proud of them. 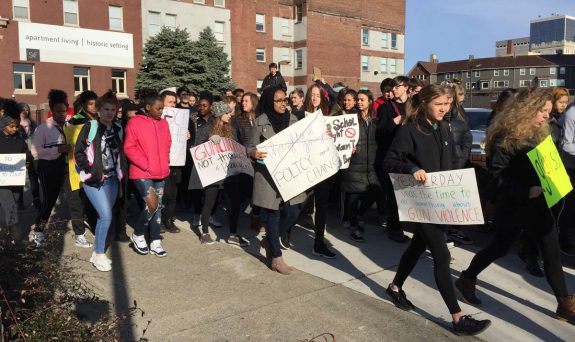 An inadequate justification.
Much as the pharmaceutical industry controls what Congress and the FDA does, the lobby of gun manufacturers and enthusiasts has captured the legislative and regulatory process. To justify doing nothing to abet our epidemic of gun violence; proponents of unrestrained access to firearms  (of any type, in any place, and at any time) point to the Constitution of the United States – specifically its second amendment.  That amendment to the original Constitution declares that for “a well regulated militia, being necessary to the security of a free state, the right of the people to keep and bear Arms shall not be infringed.” Of course, this is the same Constitution that endorsed the enslavement of non-whites; mandated that those “held to service or labor in one state” must be returned by another should they escape; withheld the vote from females; and instituted an indirect method of voting for senators and presidents more characteristic of a House of Lords than a fully representative government. Given that the Constitution was considered by its authors to be a living document, some of these  directives were voided, clarified, or augmented by additional amendments. One of these was the Second Amendment referenced above. Another was the 18th amendment which prohibited the manufacture, sale, or transportation of intoxicating liquors. As clear evidence that the Constitution is not engraved into stone, the 18th amendment was largely repealed by the 21st. Suffice it to say that other fundamental changes have been made to the Constitution of the United States. The most recent was the 27th which was finally ratified in 1992 and relates to the compensation of Senators and Representatives. Efforts to change the Constitution are ongoing, such the recent effort to make same-sex marriage unconstitutional.

In preparing this article, I re-read our Constitution with reference to guns and militia in mind. Thus, the Constitution authorizes Congress to “organize, arm, and discipline the militia.”  The President is declared Commander-in-Chief of the militias of the several states.  The militia can be called forth “to execute laws of the Union and suppress insurrections…” However, it is clear to me that the “militia” being referred to in the Constitution has more in common with the National Guard units of our present states than it does with the kinds of militias of subversive or anti-government groups that blow up federal buildings. I read nothing into our Constitution that would endorse carrying machine guns into movie theaters.  I see abundant proof that the Constitution can be reinterpreted or rewritten.

Risk vs. Benefit.
I have been a practicing physician and teacher of physicians for almost 50 years. Intrinsic to these professions is a balancing act that weighs the potential benefits against the risks of everything we recommend or do. Nothing we do in medicine is completely free of risk– not even the central act of taking a history and doing a physical examination. Seeking to deal with this balance in medical practice defines the core of one of our oldest ethical standards– “to do no harm.” How to gather the evidence necessary to appropriately weigh risk against benefit, and then how to convey this to our patients, is central to medical teaching.  I assert that it is impossible to practice medicine without doing harm or exposing to risk, but we can continuously seek to learn more and do better!

I at least profess to have an open mind!  Perhaps there are some societal benefits to unrestrained ownership and availability of firearms of any type. Perhaps at some time or in some place an armed teacher will get the drop on some shooter that will prevent or limit school casualties.  Predictably however, sometimes the teacher will inevitably miss, shoot the wrong person, or be shot in turn by the shooter or other rescuers. It is inevitable that some student or family member will gain access to the teacher’s gun and injure themselves or others either by accident or on purpose. Because of the legislative prohibition of research into gun violence, we do not have a lot of data available to help us balance potential benefits against these obvious risks and others not so obvious or unknown.

We deserve informed consent.
I knew that when I recommended a powerful medicine like methotrexate (a traditional cancer chemotherapy drug) to my patients with bad rheumatoid arthritis, that there was a definite risk that something untoward might happen because of the drug.  When I negotiated with my patient about whether or not to go forward, I would tell them what I knew about possible adverse reactions to the treatment; what could be done to ameliorate such; and the potential risk from their ongoing inflammatory arthritis. This process is called obtaining informed consent.  Assuming that our elected officials serve only with our collective consent, I ask now of every elected official to help us understand what we constituents are getting and what we are giving up when they vote for or against every effort at gun control. Please be clear and tell us in the comments section below why you think the benefits of private handgun ownership and unlimited concealed-carry is worth it. Why does a right of nonmilitary ownership of machine guns outweigh the firearm carnage we have been living with?  Convince me and others that we are wrong in seeking major change. You need to do this, because a reasonable person might assume you have been bought-off by the NRA and the firearm manufacturers behind that organization and that your reelection is more important than preventable deaths.  Don’t tell us that some people need guns to protect them from the Government.   These self-designated “militias” include some of the same people who are killing us!   I want to hear something more than that the Constitution instructs us that our allowing our epidemic of gun violence to continue without effort to eliminate it is a trade-off worth making. 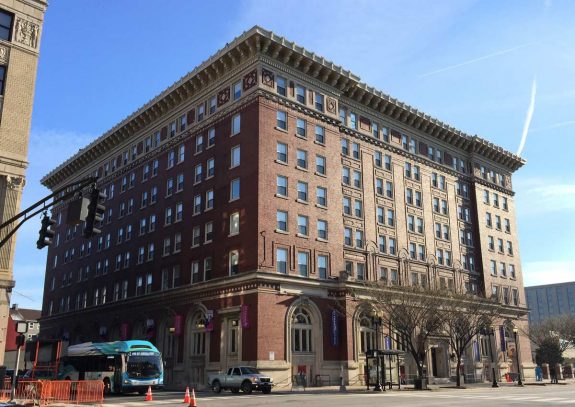 8 thoughts on “Our Unregulated Militia Is Killing Our Children.”