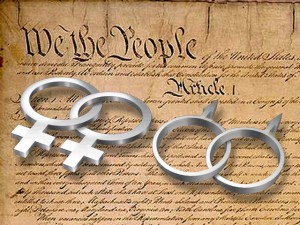 Last week the Commonwealth of Kentucky made headlines all around the country when Federal Judge John G. Heyburn II ruled that Kentucky’s laws and constitutional amendment prohibiting the recognition of legal same-sex marriages performed in other states were unconstitutional. (Bourke v. Beshear) We are not the last state to recognize the wrongs of the past, but sadly we were not the first. In its recent Windsor decision, the US Supreme Court recently came to the same conclusion. Those institutions who currently discriminate against such marriages no longer can use the lame excuse that they are only following the law to cover what for at least some is simple institutional intolerance.

I find it both ironic yet predictable that some folks locally and nationally rail against Judge Heyburn’s decision concerning same-sex marriage as judicial activism and an attack on the Constitution even as they admit to not having read it!  I found in the language of the opinion the most logical, eloquent, and powerful arguments in support of our Constitutions in recent memory. It will be instructive to see how local institutions change their existing policies. I asked KentuckyOne Health how they plan to modify their exclusionary policies for their Kentucky employees, but received no response yet. Perhaps KentuckyOne is waiting for the decision to become final at which time they they will have no choice but to change?

Waiting for the appeal?
Predictably, the champions of Church over State are urging the Governor and Attorney General to appeal the decision of Judge Heyburn.  Why am I not surprised?  State Rep.Tim Moore of Elizabethtown claimed: “The laws of other states or the ruling of a federal court should not trump the will of a majority of Kentuckians.” Rep. Stan Lee of Lexington, who regularly sponsors socially conservative legislation, wrote in a similar vein. Of course this is what some people used to say about slavery, intra-racial marriage, segregated schools, contraception, homosexuality, or denying women the vote.

Indeed, Lawyer Stan Lee himself wrote the Amicus Brief for the Family Trust Foundation of Kentucky urging Judge Heyburn to reject the claims of the happily married couples and their children who brought the suit in the first place. The Judge noted that Mr. Lee offered in his brief as justification to deny recognition of the marriages of the plaintiffs, “additional purported legitimate interests including: responsible procreation and childrearing, steering naturally procreative relationships into stable unions, promoting the optimal childrearing environment, and proceeding with caution when considering changes in how the state defines marriage.”

However, Judge Heyburn also noted in hie decision that, “The State, [the Commonwealth is the defendant.] not surprisingly, declined to offer these justifications, as each has failed rational basis review in every court to consider them post-Windsor, and most courts pre-Windsor.” … “As in other cases that have rejected the amicus’s arguments, no one in this case has offered factual or rational reasons why Kentucky’s laws are rationally related to any of these purposes.” Indeed, it is made clear that the intention of the legislation and constitutional amendment under challenge was to enshrine a single version of religious belief into the law for all. “The legislative history of Kentucky’s laws clearly demonstrates the intent to permanently prevent the recognition of same-sex marriage in Kentucky. Whether that purpose also demonstrates an obvious animus against same-sex couples may be debatable. But those two motivations are often different sides of the same coin.”

The response by the plaintiffs to Lawyer Lee’s amicus brief systematiically dismantles his arguments in a less face-saving way and concludes: “the Family Foundation’s Brief should be held for naught, or at least taken for what it truly is: an endorsement of unconstitutional, unjustifiable discrimination based on sexual orientation.” These threadbare arguments to protect the institution of marriage and rail against same-sex marriage are the same ones that have been used to keep women submissive, barefoot, pregnant, and in the kitchen. [My words, not the plaintiffs.] It is no surprise that the Commonwealth did not give even lip-service to these illogical arguments.

Your should read these eminently understandable documents yourself. I provide links to them below. The blood of some will boil. Others like me will weep at the majesty of the language and the ideals they propound. American Democracy has evolved beyond its initial flawed implementation and is no longer a vehicle to force the will of even a majority, or of those in power upon the constitutionally protected rights of any minority. The relevance to this health policy blog is that protecting the particular religious tenets of a hospital in its dealings with either its employees or its patients is not a proper role for our government.