St. Joseph’s London Hospital has notified the state that it will no longer perform coronary artery bypass graft surgery (CABG), the traditional open-chest cardio-thoracic surgical procedure used to restore blood flow to the heart of people with severe coronary artery atherosclerosis. Before the advent of the the less invasive angioplasty and stenting, CABG was the main surgical approach to re-vascularization of a diseased heart. For certain combinations of coronary artery disease, and in some clinical settings, CABG remains the preferred approach today.

Why fewer invasive procedures?
In Kentucky, the frequency of both angioplasty and CABG have been gradually decreasing, presumably because the effectiveness of aggressive medical therapy is better recognized, and because research showed that the invasive approaches were being used in circumstances where they offered no advantage over non-invasive treatment. Treatment of coronary artery disease is lucrative for hospitals and physicians alike which unfortunately caused some to stretch the envelope beyond what could be justified medically, even to the point of fraud. That bubble is bursting and accounts for a some if not much of the overall decrease in invasive procedures.

Where will patients go?
The new plan in London is to transfer those patients requiring emergency surgery to one of the nearer hospitals capable of treating such a patient, presumably Pikeville, Hazard, Corbin, Asheville, Summerset, or Lexington. (Some of these hospitals perform fewer CABGs than in London!) For non-emergency surgery, patients will be referred to another KentuckyOne hospital– St. Joseph’s Lexington. Angioplasty and stenting will continue to be performed at St. Joseph’s London presumably with safeguards in place to make sure that the most appropriate procedure will be offered for medical reasons and not for convenience.

How come?
As reported in the Sentinel-Echo, KentuckyOne justified its decision because, “Consistent with a national trend, the volume of heart bypass procedures performed at SJL is declining.  Therefore, it is an appropriate time to consolidate with our sister facility where a significant volume of these surgeries are still performed.” Certainly when there is excess capacity or maldistribution of services, consolidation can be appropriate– in fact desirable.

KentuckyOne stressed that it was discontinuing this formerly heavily-marketed procedure “voluntarily.” In the sense that no governmental or other regulatory authority shut them down, or that the suspension was not related to some other settlement; I take KentuckyOne at its word. However, in my opinion, the suspension was indeed forced by other events beyond the hospital’s control. First of all, KentuckyOne Health is in a financial pickle. By it’s own admission, it must decrease expenditures by $218 million by fiscal year 2015. Across-the-board layoffs are already occurring, and many more cuts will be needed to reach this perhaps unprecedented target. More consolidation is certain to be unveiled.

Frequency of CABG in London declined faster than in the state.
While it is true that the frequency of CABG in Kentucky is trending downwards, St. Joseph’s London has a more specific problem. It’s cardiology services have taken a body blow from revelations about angioplasty abuse in its hospital. At least one of its doctors is currently in prison, and others and the hospital itself remain under federal investigation and supervision. Court records indicate that angioplasty and other invasive cardiac procedures, including CABG, were performed on people who did not need them. The frequency of angioplasties at the hospital plummeted, as did the frequency of coronary bypass procedures. Once having advertised its cardiac service as one of the very best in the nation, the Kentucky Hospital Association’s Hospital Charges Database reports only 25 CABGs in 2012, the fewest of any reportable hospital in Kentucky! That would be little more than two surgeries per month. More recent numbers are not yet available and likely to be lower. Obviously many patients and their referring physicians have made a decision to obtain their cardiac care elsewhere.

Historical Data on CABG in Kentucky.
Below is a chart I prepared based on the numbers of yearly hospital discharges where, for billing purposes, coronary artery bypass was listed as the principal reason the patient was admitted to the hospital. The six different MSDRGs (Medical System Diagnostic Related Groups) for CABG vary on whether or not a cardiac catheterization was performed, if stents were also used, or if complications or co-morbidities were present. I used this database for earlier articles. It has the advantage of currently spanning seven years from 2006 to 2012. A disadvantage I was not immediately aware of is that only a single MSDRG is used to classify each admission, even though multiple procedures may have been performed. As it happens, in 2011, for an average of 19% of all admissions in which a CABG was performed, a principal MSDRG for some other diagnostic group was entered at discharge. In hospitals performing higher numbers of the procedure, the number of “other-than-principal” diagnoses reached 29%. The percentage in smaller hospitals, or those doing fewer procedures was considerably lower, including at St. Joseph London for which 14% of CABGs in 2011 would not have been discoverable in the Hospital Charge Database. (If anyone can explain this discrepancy related to hospital size and procedure frequency, please contact me. I have a suspicion it may have something to do with maximizing billing revenues.)

Click on the chart below to see the supporting data and definitions. 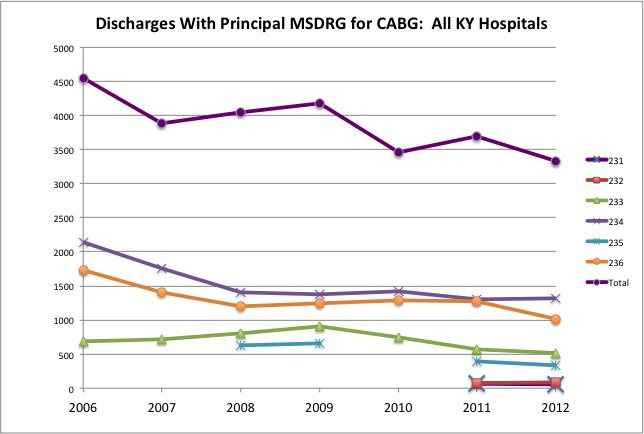 The drop in procedures at St Joseph London for both angioplasties and CABGs was much greater than for the state as a whole. For example, between 2006 and 2012, the number of CABGs done statewide dropped from 4550 to 3332, a 27% decrease. At St Joseph London (not shown on the chart), the drop of record was from 135 to 25, an 81% decrease. (From its peak of 164 discharges in 2008, just before it came under outside scrutiny, the drop at St Joseph London was 85%.) For comparison, at St Joseph Lexington, CABGs decreased only 21%, less than the state as a whole.  At King’s Daughters Hospital there was a 42% decrease as that hospital began to experience its own legal difficulties.

The most recent data available to me is attached. I understand that there are a few hospitals doing fewer than the 20 procedures yearly that it takes to make this public list. (Anyone know how to get more complete or current information.)

The frequency of CABG in 2012 ranges from a high of 455 at St. Joseph Lexington to a low of 25 at St. Joseph London. Kings’s Daughter in 2012 was second highest at 318. Most other major hospitals ranged between 150 and 260.  I do not at this time understand  all the reasons for the differences. In large metropolitan areas, several hospitals split the load. The two major teaching hospitals in the state are minor players. To me that is an important observation that deserves to be understood. In Louisville it is related to issues of  indigent care and the results of maneuvering over the most profitable services.  I assume that can happen elsewhere..

Focus on basic services first.
Hospitals and the providers in their entourage have a tendency to market their high-profit services on which to finance their growth. As we have seen, overenthusiastic expansion of specialty services at the expense of a solid clinical base can have disastrous consequences to a hospital’s financial stability and reputation. From a policy perspective, no provider should be asked to lose money from taking care of peoples’ everyday needs. There is no justification of which I am aware to the vast discrepancy of incomes between specialists and primary care providers. There is no way a government or insurer can expect a provider to lose money attending to whole segments of patients and expect our healthcare system to function. Does anyone out there think it is functioning very well now?

Cooperating networks should be what we start with.
Every Kentuckian deserves access to CABG (when medically indicated) but it doesn’t have to be done in their backyard. Apparently there are hospitals in our state doing fewer than 20 CABGs per year– less than 2 per month. It takes coordinated teams of people and expensive resources to perform this and similar complex services safely and efficiently. Should such low-volume hospitals be doing any CABGs at all? Any marketing prestige accruing to a hospital may not transfer to appropriate quality care to the patient. Better to put the money into efficient mechanisms of patient transfer in the first place. Medical care should not be the zero-sum game between hospitals that it has become.

Doctors part of hospitals now.
Physician hiring by hospitals has become the new norm in American medicine. To the extent greater cooperation and efficiency can be achieved, that is not intrinsically improper. It can however lead to wasteful competition between hospitals as each seeks to be able to “do it all;” to corner the market on the most profitable services; or to attempt to shed unprofitable ones. When physicians are reimbursed on the basis of volume or of the profitability of particular services, than very bad things can and do happen.

As a corollary to the comment above, hospitals can no longer (if they ever could) claim that they are just places where doctors work. Even without ubiquitous marketing claims of “quality” or “excellence,” hospitals need to be sure that the medical care provided in their institutions is medically appropriate, and certainly not incompetent or medically abusive. This can be a challenge using current hospital-medical staff models. Failure to actively monitor and manage what is going on in your medical house can lead to a disastrous loss of reputation in the community, and institution-crushing lawsuits. Everyone loses in that event.

A good diagnosis depends on reliable information.
We now live in a world where we expect more information about medical outcomes, quality, cost, and other benefits of transparency and accountability. The door is now open, but we have a long way to go. I am a big proponent of making the kind of information I use in the graphs above and elsewhere in these articles available to the public. It will not always be easy to interpret, but questions will be raised that deserve to be answered. If information is to be useful, it must be reliable. I can report that even the Hospital Charge Database made available through the KHA has its flaws and glitches. I am trying to obtain access to the primary hospital utilization data collected for the state and used by federal policy agencies. By statute, this information is to be made available for free to any Kentuckian, but the state is resisting doing so unless I pay prohibitive fees for ever year’s desired. That state policy has to change. Researchers and policy-makers need access to the primary data.

We can’t blame everything on Obamacare.
Our healthcare system was headed to you-know-where in a hand-basket before Obama was elected President. He was not the first to head an effort to fix it, and he will not be the last. The Affordable Care Act is not perfect. It was hobbled from the start by opposition and resulting structural compromises. Its implementation has had to proceed against continuous efforts to make it fail, and then criticized for not working as intended by those very same opponents. Nonetheless, the issues that make medical care both ruinously expensive, inefficient, and unavailable to those who need it most are very real. Is what we had six years ago any better than what we have today? I don’t think so. How many more institutional meltdowns do we have to see before we are willing to accept real changes?