Data for Kentucky extracted and available for use below.

The Center for Medicare and Medicaid Services (CMS) released the data yesterday for the first iteration of its long-awaited, much-debated, and rollout-impaired Open Payments to Physicians Program, commonly referred to as the Sunshine Act. Federal law now requires that pharmaceutical and medical device companies disclose a variety of cash payments and other transfers of value to physicians and teaching hospitals. The rationale is the justifiable concern that such payments influence the practice of medicine in an undesirable manner. The Open Payment Programs and other releases of previously hidden information are in response to the demands of the public for more transparency and accountability in healthcare finance and delivery. I think is it a good idea, but we are going to have to learn as we go how to understand and use the information.

Here is a simple scattergram of total payment amounts to each individual KY physician. The curve is heavily skewed to the left. A few are major recipients, most are at the free lunch level. Not included here or in the bullets above are the the many payments from the “de-identified” file for which the names of the physician or hospital are not yet resolved. (See below) 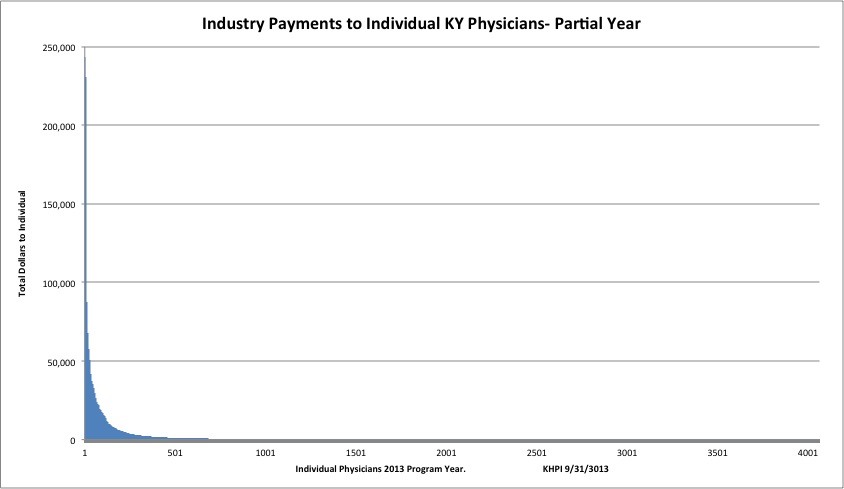 I have only just begun to unpack and examine the data. It comes in four different files listing General Payments, Payments for Research, Ownership Interests, and a look-up table providing General Information about the physicians and teaching hospitals involved. The files are presented as comma-delineated databases. The amount of information is staggering. Even for this partial-year roll-out, the General Payment database for identified reciepients has 2.6 million line-items, 54 thousand of them in Kentucky. The most common spreadsheet program, Excel, cannot handle files of this size. Each file has dozens of columns of information. What a Herculean (and expensive) task it must have been to compile, attempt to validate, and make available the information. There was absolutely no chance that this rollout could have proceeded uneventfully. The results so far are frankly disappointing. CHS tells us that some 39% of the records comprising 63% of the dollars have been “de-identified” until a wide variety of errors have been worked out.  Put another way, we only have 27% of the money to follow!   We are told to expect a better dataset next spring with a full year’s worth of data. A 51-page document describing methodology and a data dictionary is available.

[Addendum: I will add the data from the “de-identified” file in a later article. Doing so increases the total amount of reported general (non-research) payments to $9.4 million.

CMS Release Memo.
Read some extracts from the CMS announcement below and try (I promise to also) not to be too judgmental as we begin to understand what the numbers tell us. There is no doubt however that there will be some unavoidable embarrassment just as there was when Medicare payments to physicians were made public earlier this year. The way industry and its professional beneficiaries do business is already changing as a result of the knowledge that the transactions would be made public!

“This release is part of the Open Payments program, created by the Affordable Care Act, and lists consulting fees, research grants, travel reimbursements, and other gifts the health care industry – such as medical device manufacturers and pharmaceutical companies – provided to physicians and teaching hospitals during the last five months of 2013. The data contains 4.4 million payments valued at nearly $3.5 billion. Future reports will be published annually and will include a full 12 months of payment data, beginning in June 2015….

More than 26,000 physicians and 400 teaching hospitals registered in the Open Payments system to review payments attributed to them. During the review and dispute period, CMS identified payment records that had inconsistent physician information, such as National Provider Identifier (NPI) for one doctor and a license number for another. In cases where CMS was unable to match the physician information or the record was not available for review and dispute but the company had attested that the payment had been made, the personally-identifiable information has been suppressed temporarily in the record.  About 40 percent of the records published today are de-identified.  This data will be fully identifiable in 2015 after the reporting entity submits corrected data, and physicians and teaching hospitals have a chance to review and dispute.  In addition, data that were disputed and not resolved by the end of the September 11 review period have not been published and will be updated at a later date….

Lots of work ahead.
It will take me a while to get my head around what was released. Therefor I want to share the task with other interested people. To make it easier, or even possible for the average computer-user to help, I extracted the data from Kentucky for the two major “identifiable” tables– Research and General payments. The larger of these is still 10 MB in size, but the usual spread sheets should be able to handle it. To make any sense of it you will need to know how to sort a table, how to hide unnecessary columns, and perhaps use a pivot table to break it all down.

About research.
Although the University of Kentucky Hospital was the recipient of the lion’s share of the total research money to institutions, the University of Louisville Hospital received only three payments. It should be obvious that payments to the Universities themselves or to foundations or institutes associated with them are not included in this database. Too bad! These should be included in the next revision of the law. That is where the big money and the big influence lies.

Roll up your sleeves.
We are in the middle of a great experiment!  Is this and similar releases of information to the public a good idea or not? Take a look yourself and let us know your thoughts. If there is a view or breakdown of the data that you would like to see but cannot handle, let me know and I will provide the analysis for all. There is obviously much more to come.

Note: The following two Excel files contain data only for payment recipients identified by CMS in the September publication. “De-identified files have not yet been merged.

Here is ProPublica’s first dive into the data.  They have been way out from in examining the financial relationships between industry and providers.