One program or two?

I had not planned on writing quite so soon about bone marrow transplantation, but in doing my background work on U.S. News & World Report’s designation of the James Graham Brown Cancer Center as a regional high-performing cancer program, I learned that the Center has just recruited a new director for their bone marrow transplant program. Dr. William Tse is an experienced clinician and academician, was recruited from West Virginia University, and will begin in Louisville in early November. This was a fast, high-priority recruitment for the University of Louisville and the Brown Cancer Center following the loss of several clinical and research faculty faculty to the University of Kentucky, and a requirement for a minimal number of specifically-trained physicians to retain essential accreditation. Bone marrow transplantation, part of the growing field of cellular or stem-cell therapy, currently plays important part in the treatment of leukemia and other malignant diseases, and of inherited genetic disorders. Cellular therapy comprises a prominent part of the University’s commercial research portfolio.

Things looking up?
I had the opportunity to speak with one of the program’s current physicians who is optimistic about the future of the program. Although I was not given the updated procedure numbers for the two programs, I am told that they are on the way back up, as are are the numbers of clinical research protocols planned. Here is a chart updated with numbers of bone marrow transplants in 2013 as reported to the state. 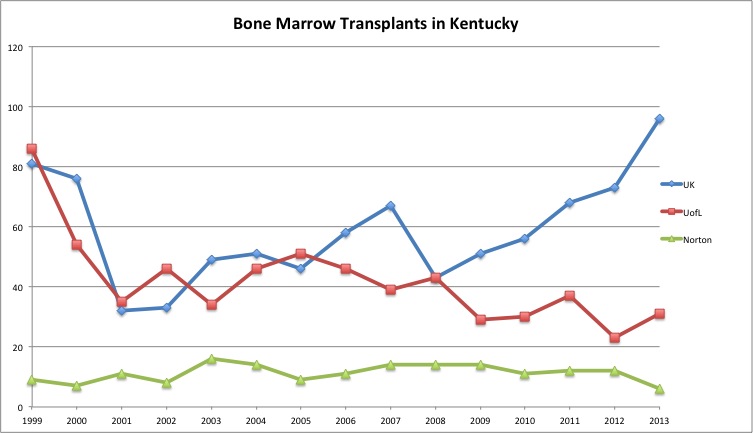 Legend: In 2013, the number of BMTs at UK (blue) rose sharply. These were all adult patients as pediatric cases from UK are usually sent to Cincinnati. The number of adult cases at UofL Hospital (red) rose slightly but have been in decline. The number of pediatric cases at Norton Kosair Children’s Hospital (green) declined in 2013. Data from KY hospital utilization reports. For interest, a chart of the number of solid-organ transplants in KY over the same period is available here. Pediatric transplants from UofL and UK are combined.

The UofL faculty physicians who staff the adult program at University Hospital and the pediatric program at Norton-Kosair Children’s Hospital are all members of the University of Louisville Physicians group practice. Not surprisingly they consider both programs to be a single joint endeavor and work closely together in clinical and research activities. I can’t imagine that it should be otherwise.

But on the other hand.
Logic and good medicine not withstanding, it is impossible to consider this matter apart from its backdrop of a longstanding and increasingly bitter dispute between the University of Louisville and its University Hospital (of which the Brown Cancer Center is a part), Norton Healthcare (which built and operates Kosair Children’s Hospital where the pediatric transplant services are located), and Kosair Charities (which has contributed some funding for indigent care at Kosair Children’s Hospital for many years but which has recently shifted the focus of its largess to the University of Louisville for outpatient pediatric care and research).

In the background is KentuckyOne Health, the hospital system that manages University of Lousiville Hospital and the Brown Cancer Center, and which signed an agreement with UofL to take over its pediatric hospital programs when the current agreement with Norton Healthcare terminates. Also in the background is the University of Kentucky and its Hospital which as a result of the rift between Norton and UofL are now performing both solid-organ and adult bone marrow transplantations for patients sent from Louisville. The dispute is complicated but literally includes the physical control, occupancy, and staffing of Kentucky’s only free-standing children’s hospital! The University has been distancing itself from Norton for some time now and has signed agreements with its new partners to sever even more of UofL’s traditional bonds with the medical community. I cannot avoid a conclusion, nor has UofL denied, that a take-over of Children’s Hospital is one of its goals.

Who owns the monopoly on bone marrow transplant?
As it is now, both programs are operated under authority of Kentucky’s Certificate of Need program which is intended to reduce unnecessary and expensive duplication of medical services. Written into state law is a requirement that pediatric bone marrow transplantation “shall be provided in a pediatric teaching facility which has the availability of physician specialty support and specialized ancillary support services; …”  On the Commonwealth’s websites, the adult bone marrow program is said to be assigned to the University of Lousiville Hospital, and the pediatric program to a word-salad combination of Norton Healthcare/Kosair Children’s Hospital/ and Norton Pavilion. While this latter identification would have made sense in 1990 when the CON was granted, the labels are currently being intensively parsed in litigation. While the collegial spirits of their faculty clinicians may reflect one reality, on the ground are two different hospitals three blocks apart physically, each with its own bone marrow processing laboratory, but which are owned or managed by two competing hospital systems that are worlds apart. This is not a recipe for success, nor is it beneficial to the citizens of Kentucky.

I have been reliably told that since the Attorney General’s Office became involved, that at least two of the parties in the various litigations are back in arbitration. I have no idea what is happening. If the Attorney General or Governor are holding some feet to the fire— so much the better. I would like to dream that a lot of ugly history could be rolled back, but that may not be possible. I urge all parties to remember that their first duty is to the children of Kentucky, not commercial translational research, economic development, nor capture of medical markets. We have a lot more to lose than we already have.

Help me clarify or correct any errors in the above.