CHI’s corporate first quarter financial update for the months July through September of 2014 was made public last Friday. The report was not good. There was a loss in patient care services of $122 Million that increased to $132 Million after “restructuring, impairment and other losses’” and was magnified further by non-operating losses to a total loss of $198 Million. This represents 5.4% of total operating revenues and is therefore meaningful. In the same quarter last year, there was a profit of $401 Million— a $599 Million swing in the wrong direction.

Last year CHI’s KentuckyOne operation was generating the greatest losses for the organization. This year its first quarter results showed a positive $1.7 Million profit. Of course, this is before “restructuring” or covering its share of national non-operating losses. I think it is safe to assume that KentuckyOne Health and any other Kentucky operations were paying out more money than they were bringing in. The KentuckyOne region remains at the bottom of the list of CHI regions in terms of operating income. Kentucky contributes substantial operating revenues, but its operating earnings margin is only 0.3% before all the adjustments.

What is behind the corporate losses?
CHI points to its ongoing acquisitions as a factor behind its losses. While the addition of new clinical facilities can increase total patient visits and surgeries, first-quarter “same-store” statistics at existing facilities showed declines compared to last year in acute admissions and inpatient days, inpatient and outpatient surgeries, and outpatient non-ER visits. To my understanding, these numbers reflect a loss of patient share in their communities. Enhanced collections or more attention to payor mix can offset the financial impact of service volume losses.  (Any other interpretations out there?) Inpatient ER visits decreased (desirable for an insurer but not for hospital profits) and outpatient ER visits increased modestly (good for hospital profits). The report itself has additional data and charts showing selected clinical utilization. Judge for yourself if patient volume activity is increasing in parallel with acquisitions. (Page 7 of report.) 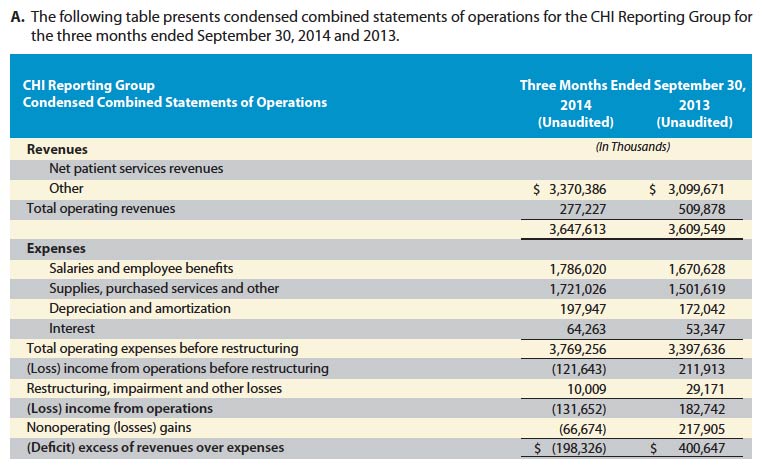 The fix?  Massive Layoffs.
“Management is addressing the declines in operating revenue performance through focused clinical and operational initiatives across the enterprise, targeted growth initiatives at the market level, revenue cycle improvement initiatives through its relationship with Conifer Health Solutions (which currently provides revenue cycle for CHI’s acute care operations), and by initiating a comprehensive cost reduction strategy to identify opportunities for expense reductions. Among the actions to reduce expenses include workforce reductions of up to 1,500 positions across CHI. That process is ongoing and will continue through the end of January 2015.”

How about Kentucky?
From the report: “The Kentucky Region’s operating performance has shown significant improvements over the comparable period of the prior fiscal year, reporting operating EBIDA before restructuring of $1.7 million for the three months ended September 30, 2014 and an overall increase of $16.4 million in operating EBIDA before restructuring over the corresponding period of the prior fiscal year. 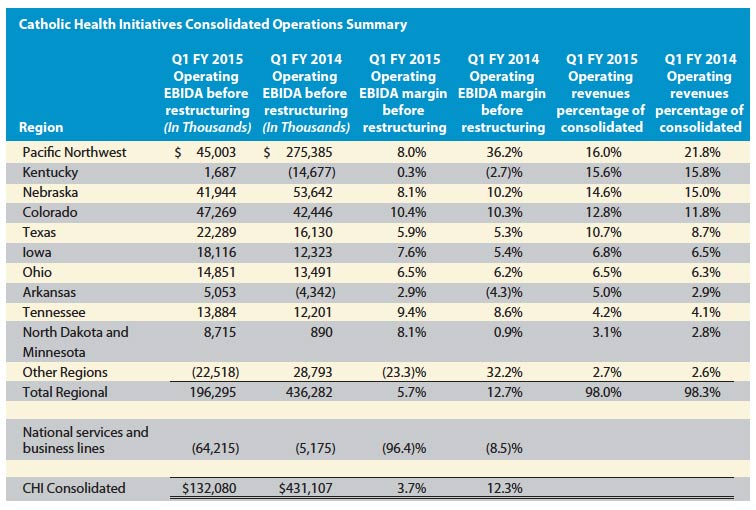 The financial and operating results of the Kentucky Region continues to reflect a challenging statewide health care environment related to reimbursement, shifts in payer mix and market competition. Integration is the primary focus for the Kentucky Region through strategic clinical and operational initiatives that include revenue cycle services and yield; expenses; access to services and organic growth. During fiscal year 2014, an enterprise multi-disciplinary executive team was appointed to guide the Kentucky Region’s strategic and financial turn-around activities (referred to as Strategic, Operational, Repositioning, and Transformation (“SORT”)). SORT activities are focused in three major areas: growth, revenue improvement and expense management. Numerous opportunities are projected to yield substantial financial improvement in each of these three areas and are being aggressively implemented to ensure success and sustainability. This effort remains a high priority for management as KentuckyOne Health focuses on significantly improving its financial results. In fiscal year 2014, one of the major initiatives that came out of this work was a significant reduction in the labor force in order to align labor expenses with patient volumes. Additionally, a major emphasis is being placed on integration of services across the Downtown Louisville Medical Campus in order to improve clinical programs and eliminate duplication and services building upon the March 2013 partnership agreement with the University of Louisville Health Science Center, which was part of the Kentucky JOA transaction.”

I wish them well, but to achieve the present shift in its balance sheet, KentuckyOne had to layoff some 500 employees and hire more billing-type people. It shut down entire wards in its hospitals. While these actions may balance the books in the short term, in the longer run the results remain to be seen. Clinical capacity and perhaps competitiveness is reduced. Goodwill in the community and in particular the body of existing or potential employees can be diminished. Great attention must be given to the real and perceived quality of care offered. As of the most recent iterations of safety and quality scores, the ranking of the flagship KentuckyOne hospitals in Louisville is very mixed indeed. I am by no means convinced that the most commonly used measures of hospital safety or quality are fully ready for prime time, but a hospital that is selective on which rankings it choses to use in tis promotions opens itself up for increased scrutiny.

Legal Proceedings:
The federal settlements and civil lawsuits for “alleged” abuse of invasive cardiology services and for improper relationships with physicians at St. Joseph Towson and St. Joseph London are restated. A new national settlement with the Department of Justice related to improper use of implantable cardiac defibrillators is announced without mention of the amount of the financial settlement. No mention is made of civil suits stemming from these latter invasive cardiac procedures.

“Charity” Care.
The report contains the statement: “As an integral part of its mission, CHI accepts and treats all patients without regard to the ability to pay.” Of course, we have already seen that there are rather significant limits to who will be served and for what. CHI takes the view of many other hospitals that charity care includes much, if not most of what it cannot collect from its patients. Hospitals in general want to keep this figure high in order to justify their non-profit status. This is not the traditional community or even the religious definition of charity care which is care provided for which no bill is given or expected. CHI claims it provided $69.7 Million in charity care during this first quarter, but in my opinion this is misleading. (See page 14 of the report for additional details.)

Looking forward.
These reports are required for the financial industry regulatory overseers. They no doubt serve that function successfully, but they are difficult for the rest of us to understand. If I have made errors of fact, or if there is a better interpretation, I would be glad to be advised. Please take a look at a recent “User’s Guide” to KHPI to see how to do so. My takeaway is that things are in flux but that the ultimate outcome is far from certain. I am hearing that the purse strings of KentuckyOne have loosened somewhat with regard to promised payments to the University of Louisville, but the uses of those monies are constrained by contractual agreements that take into consideration the benefit to KentuckyOne. I have obtained the parameters of use of payments to UofL through an Open Records request and will present them some future time.