CHI riding a wave of acquisitions?

Once again Chris Otts of WDRB is first in our region to report on the release of Catholic Health Initiative’s (CHI’s) annual financial report for FY 2014. Data from the financial report shows continuing losses in CHI’s Kentucky operations of $69 million for the fiscal year ending June 30, amounting to a loss of 3.2% of Kentucky revenues. This compares to a modest profit of $33 million in FY 2013. I do not claim to fully understand such financial reports [help requested!], but Mr. Otts notes that the loss is stated before deducting financial expenses that would make the numbers worse.

Good news or bad?
Is this good news, or bad news for KentuckyOne Health, CHI’s business arm in Kentucky? Recall that towards the end of FY 2013, KentuckyOne reported accelerating losses of $134 million for the nine months ending March 31, 2014, and also forcast a $218 million budget deficit for FY 2015. This indicator of of potential financial disaster prompted layoffs of hundreds of Kentucky employees and announcement of plans to reduce and consolidate services. Mitigating this employee reduction was the hiring of positions focused on improving collections. How is this working out? I cannot say. The company is already 4 months into FY 2015 without a public financial update. I wish I could say I am hearing more good news locally than bad. [The first-quarter 2015 report is in. See comment below.]

I refer readers to Mr. Otts’ report above which includes comments from KentuckyOne’s spokesperson, Barbara Mackovic, that the company is “on track” to reduce its budget deficits. Further savings are hoped for through additional consolidation in the downtown Louisville hospitals, increasing further my concerns about diminution of the status of University of Louisville Hospital. Highlighted as examples of investment in the Kentucky system are modest ($9 million) improvements to the emergency room at St. Mary and Elizabeth Hospital and a $1 million expansion of the Breast Care Center at St. Joseph East in Lexington. (Since the money for the Sts. M&E emergency room was provided by employee contributions and the Hospital’s own foundation, I would count this initiative more like a “boot-strap” effort than corporate support from CHI or KentuckyOne!)  Promised investments in the partnership with University of Louisville have to my knowledge not been made, or at least not announced. (Invitation to UofL– Give us the good news please!)

Digging in a little deeper.
KentuckyOne and the University of Louisville have been very guarded about revealing much or anything of their internal operations in Louisville. Given that the two organizations use public money to manage a public hospital that has important safety-net responsibilities, and to run the clinical and teaching operations of our state medical school, in my opinion the degree of transparency and accountability provided is grossly insufficient. This is especially relevant given available accounts of substantial deficiencies and problems in the school and hospitals. I am surprised that our governmental representatives have not required more accountability. Therefore, given that the financial reports of CHI are one of the few windows available into the internal machinery of the KentuckyOne/UofL partnership, I take this opportunity to extract additional insight from what is available.

CHI earnings by region.
The first table provides indicators of revenues and earnings from 10 regions (pdf)

designated by CHI. [Information from the Pennsylvania region was not provided by CHI.] Income is reported as EBIDA (Earnings from operations Before Interest, Depreciation, and Amortization.) Therefore as I understand it, a company with a positive EBIDA can still be losing money. Additionally, earnings are presented before the costs of “restructuring” are that may also reduce profit. Restructuring adjustments include things that seem fuzzy to me like “asset impairments, and reorganization and severance costs at the Corporate office and in the Kentucky, Arkansas, and Pacific Northwest Regions.”

Although Kentucky remains as one of the top three regions in terms of total operating revenue, it is the only one showing a loss in earnings/profitability for FY 2014. The Kentucky region showed a modest profit in FY 3013 but its operating EBIDA margin from operations was only an unhealthy 1.7% falling to the loss of 3.2% in FY 2014. This is not good for a hospital system– you can’t make it up on volume alone! The Kentucky region was not in a strong or perhaps even profitable position before its partnership with UofL. It has plummeted since.

What happened to other regions that were in the red last year?
Texas and Arkansas both had operating losses in FY 2013, but pulled themselves into the black for FY 2014. There were employee layoffs in Arkansas. Likely there were staffing and other changes in both states. Hospital, and other acquisitions including an insurance company in Arkansas appear to have made the difference.

CHI is selling one of its assets, St. Clare’s Health System of New Jersey, which was losing money. It had a “deficiency of revenues over expenses of $(14.8) million and $(70) million for the fiscal years ended 2014 and 2013 respectively…).” Given this precedent, if I were a troubled hospital in Kentucky, I would be nervous.

The affiliation with University Medical Center, Inc., and UofL in Kentucky been difficult for CHI but cannot be said out-of-hand to have caused KentuckyOne’s financial problems. The acquisition of some operations at the Baylor Medical School does not seem to have hurt in Texas. Indeed, the University of Louisville Hospital retains its long-standing profitability without which KentuckyOne’s financial picture would be even worse! This is not what KentuckyOne and CHI promised our state leadership and community in their bid for merger and then partnership with UofL.

Other items from the annual report. 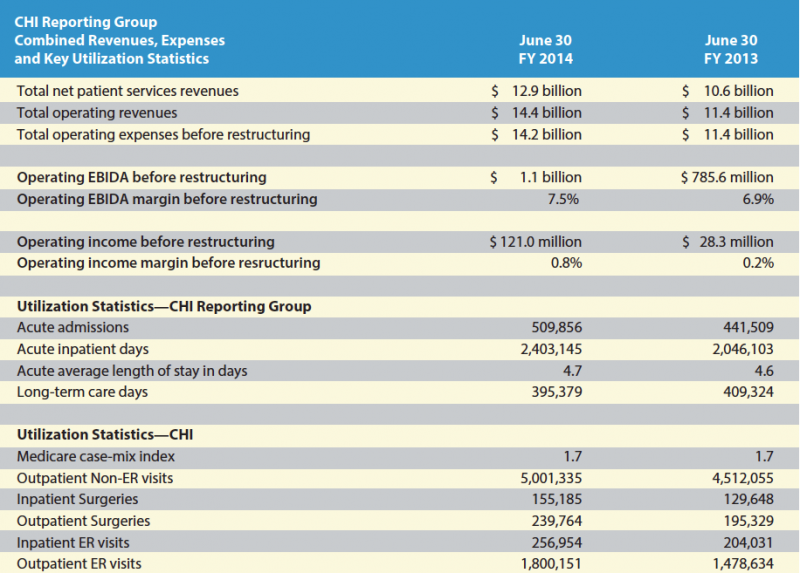 I am the first to admit that I am a novice in reading formal financial statements. There are a lot of very large numbers in CHI’s report. Some items are in the billions of dollars! Some regions appear to be cash registers. I started to try to dissect out some figures that would be helpful in understanding our Kentucky situation but had to give up. Much of the apparent system-wide improvement in financial status appears to be due to new acquisitions. I could not shed much light on the health of existing facilities, and little was broken out for Kentucky except that of the 10 regions reported, it was in the cellar.

Clinical services increased system-wide.
No doubt related to acquisitions, but CHI acquired more hospital beds, and did more outpatient and inpatient surgeries. Better reimbursements from insurers may be due to the increased negotiating clout in areas where market share is high. New patients fed into the system by the Accountable Care Act probably also played a role as it has for other hospitals. These numbers were not broken out by region. However, patient and service volumes in “same store” facilities did not change very much throughout the CHI network. In general, inpatient services and procedures declined and outpatient services increased in these preexisting same-store facilities. This might be considered desirable in the new world of healthcare reform and the Accountable Care Act!

What were Kentucky’s problems & how to fix them?
Kentucky’s predicament was said to be related to a “challenging statewide healthcare environment related to reimbursement, shifts in payer mix and market competition.” No mention is made of the problems of decreased patient volume, physician retention and increased accounts receivable that were said to have caused the big losses at the three-quarter mark of FY 2014. To improve matters in FY 2015: “Integration is the primary focus for the Kentucky Region through strategic clinical and operational initiatives that include revenue cycle services and yield; expenses; access to services and organic growth,” –whatever that means. Multi-disciplinary executive teams will be focused on “growth, revenue improvement, and expense management.”

Other items that were noteworthy to me.
Like the package inserts for prescription drugs, I suspect that financial reports are written by lawyers for other lawyers!  It may well be due to my limited familiarity with financial reports, but several items surprised me. Therefore, I welcome any comments below or other communication to correct any of my errors of fact or interpretation.

• Despite huge revenues of some $13 billion from patient operations, the income from operations was only a paltry $3.5 million. That seems to me like a razor-thin margin for a hospital company and makes me nervous.

• Long term debt for CHI increased from $6.4 to $7.2 billion during the year and total debt from $7.4 to $8.4 billion at a time when its bond-ratings have weakened.

• A capital budget for FY 2015 of $1.36 billion is presented, but the specific improvements mentioned in the report for the Kentucky region are relatively puny.  Indeed, newspaper accounts of the emergency room improvements at Sts. Mary and Elizabeth note that much of that money came from private charitable sources! Much more was promised in the sales pitch for the UMC/UofL partnership. Where is the concern of our community leaders?

• Unlike last year’s report, there is no specific figure given for the provision of charitable care. In FY 2013, the amount was decreasing and said to be 3% of revenues. Nationally, Catholic hospitals provide less charitable care than one might expect. Three percent was low in my opinion. Given the new revenues flowing from the ACA that offset charitable care for hospitals, perhaps this year’s amount is even lower.

Litigation issues.
This year’s report identifies the settlement agreements entered with the federal government over allegations of improper financial arrangements with physicians, improper billing, and provision of unnecessary cardiac services to patients at St. Joseph Towson in Maryland, and St. Joseph London in Kentucky. The existence of civil lawsuits in these hospitals is acknowledged which CHI pledges to vigorously defend. Also identified are Department of Justice inquiries over implantable cardio-defibrillators.  “Management believes that adequate reserves have been established and that the outcome of the current litigation will not have a material adverse effect on the financial position or results of operations of CHI.” I would argue, however, that these legal matters have already had effects on the clinical operations of the hospitals at issue.

How much longer will CHI hang on to its assets in KentuckyOne?
It is no state secret that CHI/KentuckyOne has been having financial problems in the Louisville market and elsewhere in the state. I have no audited financial reports for any individual KentuckyOne hospital. I mostly hear only the bad news from former colleagues and others. As noted above, CHI is not afraid to cut its losses. It is selling St. Clare’s Health System in New Jersey despite progress in reducing losses there. Although there have been carefully worded denials, I understand from sources that I trust that CHI/KentuckyOne has been looking for someone to take Jewish Hospital off their hands. Efforts by CHI over the past several years do not seem to have been able to reverse the long-term decline of that historically important Louisville hospital. Given that Jewish Hospital is central to the mutual goals of the KentuckyOne partnership with the University of Louisville and University Hospital, its divestiture to another organization would essentially blow up the downtown academic medical center. Of course, it can be argued, and I do so, that the downtown academic medical center is already coming apart. Chaos is a word that comes to mind, but titanic shifts in the management of University Hospital have happened before— more than once. We are in the middle of another, regardless of the financial health of CHI and KentuckyOne.

I repeat my invitation to help me correct any error of fact or to suggest another interpretation in the comments below or privately.