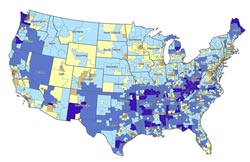 I wrote earlier about how an economy and culture in Eastern Kentucky so dependent on disability payments might so easily overlook, and even accommodate widespread abuses within our medical and legal structures. The “angioplasty abuse” that I and others have been writing about these past months unfolded in that setting. Full-fledged “disability abuse” is again emerging into the sterilizing light of day. It seems all you have to do to find these things, is look for them.

A flurry of media reports began yesterday focusing on a U.S. Senate investigative report accusing specific doctors, lawyers, and even judges of conspiring to inappropriately award disability to hundreds and even thousands of people. The scam could not have been more out in the open– billboards advised people to step right up and take advantage.

Stephen Ohlemacher reported prominently for the Associated Press, but the story is making the rounds in many venues. The matter plays well politically to those who would seek to gut any-and-all governmental safety net programs. (I am not one of them!) I have not been able to secure a copy of the actual Senate report, perhaps due to governmental furloughs. If anyone can help me, I will follow-up with more specifics.

I know a little about disability.
In my hands-on medical career as a rheumatologist, I had much personal experience with disability programs. Some people shop for accommodating physicians who will “award” them with a declaration of disability in the same way some patients doctor-shop for prescription narcotics.

Even when there are substantial medical problems, the path to disability is so poorly laid out that doctors and patients with the best of intentions will fall to the side of the trail. Part of the problem lies in the fact that as physicians we are forced to use legal definitions and structures to deal with medical and scientific problems. (I discovered the same dichotomy when I was involved in issues of Medicare coverage determinations.)

For example, the first Social Security disability letter I ever wrote was for a patient whose rheumatoid arthritis was among the worst I had encountered. Many of her joints were essentially destroyed. I was frankly amazed she had continued to work at all. My long letter detailed the objective physical findings and how limiting these would be for the work she had been performing. To my great surprise, her application was denied– apparently the most common outcome. Ultimately, as also seems to be the case, her appeals were successful. What does this say about the objectivity, fairness, or even the ability to subvert the process of awarding disability?

To have rheumatoid arthritis was to be disabled.
Just to point out the medical “dumbness” of this legal process I want to tell you another personal story. Shortly after the clinical episode described above, I worked with the Social Security Administration to create instructional videos for administrative law judges who participate in the Medicare disability program. In one, I gave a nuts-and-bolts lecture about the nature of arthritis, and in a second I described how these kinds of illnesses limited functional ability. I taught about arthritis, but I learned about the disability process! It was then I heard for the first time about “the listings” for disability.

For every major disease or disease category, the Federal Registry lists a number of criteria against which every application for disability is judged administratively. Medical review is barely necessary if at all. Check the right boxes and the application sails through.  When I looked at the “listings” for rheumatoid arthritis, I was stunned. They essentially duplicated the earliest American Rheumatoid Association diagnostic criteria used for rheumatoid arthritis research. Aside from the well-known fact that such research criteria do not always make the best clinical criteria, the listings included diagnostic tests so archaic they were no longer being used. In short, to have an old-fashioned diagnosis of rheumatoid arthritis was by definition to be disabled no matter how mild the case! That was a great surprise to me, and the hundreds of my patients who were successfully coping with their illness and leading rewarding personal and professional lives.

The next supporting disability letter I wrote for this disease was less than one page and was approved in the shortest time that the case manager had even seen– even faster than that of the medical-legal cabal whose existence stimulated the writing of this article.

I do not know if the “listings” for rheumatoid arthritis remain the same, but I have little doubt that the process we are using today is too often scientifically inaccurate, too subjective, and too open to manipulation. It is unfair to both the individuals seeking assistance and to the public who finances the process. Just as the phenomenal numbers of patients emerging from the angioplasty-factory of Eastern Kentucky represent a sore thumb deserving of an accurate diagnosis, the disability-economy of that region and similar ones deserves more of our attention. In my opinion, our disability safety nets are full of holes and need mending.

2 thoughts on “Disability-Abuse Alive and Well in Eastern Kentucky.”