Numerous earlier reports by Mr. Chris Otts of WDRB brought to the attention of the public information about financial dealings of enough concern that at least two major donors to the University of Louisville withdraw their support, triggering in large measure an intervention by the University of Board of Trustees to take a more controlling role in the University of Louisville Foundation and a full-scale fiduciary audit. This latter offers the potential to clear the air or to lead to even more troublesome revelations. Mr. Otts’s latest report  deals with unauthorized spending of the University’s endowment by the Foundation in support of its commercial research, real estate, and other agendas both known and unknown. The result has been a substantial fall in the value of the endowment as its principal is consumed.

Sparked by Mr. Otts’s use of information provided to him by the University as reported to the American Association of College and University Business Officers (NACUBO); and by comments made by Trustees Greenberg and Benz at last week’s meeting of UofL Trustees raising serious concerns about the endowment; I went to NACUBO’s website myself.  Summary files for public use are available including the market values of the endowments of some 850 of the most important Colleges and Universities in the US and Canada from 1990 to 2015.  I abstracted these and plotted the market value of UofL’s endowment along with its rank among other institutions in this regard. Spending information or investment yields for individual institutions are not made available to the public, although summary statistics on aggregates in broad categories are available. A static image is presented below, and an interactive version revealing the underlying data is available.

In summary, the amount of our endowment rose progressively from 1990 until around 2007 after which much volatility occurred to the point that the market value of the endowment in 2016 is indeed less than it was 10 years ago in 2006!  UofL appears to be eating its nest egg, and compared to other institutions of higher education, is losing ground in endowment growth. 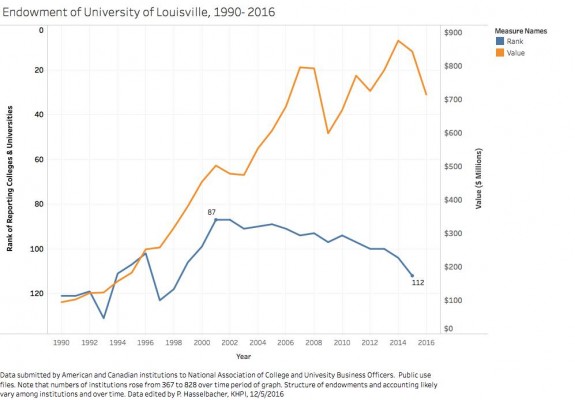 Fall in rank in size of endowment.
Of course, other institutions have not been sitting on their hands, raising enough in contributions and investment gains such that UofL’s rank in market value of its endowment began to fall continuously beginning in 2001 through 2015, from 87th to 112th place. (Numbers from FYU 2016 were not available on the NACUBO website, a year in which UofL’s endowment market value dropped some $160 Million and perhaps more.)

Some of the volatility in rank in the earlier years may stem from the fact that the number of institutions submitting reports to NACUBO rose from 367 to 568 by the year 2000. However, the number of reports has remained relatively constant in the mid-800s since 2009 during which UofL’s decline in rank continued apace and may be accelerating. I have not itemized the schools that ranked higher than UofL over these years, but the top hundred have what would be expected based on overall reputation. Even at 112 we are in pretty good company.

Another cause of early volatility in endowment rank is that fact that overall, the values of endowments in the earlier years of this graphic were considerably lower than today. Just as I have shown for UofL’s standing in NIH funding for research, when you are starting out in the lower ranks, a good grant or two can result in a large swing in national ranking. So it is with endowments. For example, in 1992, when UofL ranked 119th in its endowment, an increase of $10 million in contributions or investment earnings would have improved UofL’s a rank to 111.  Conversely, $10 Million less would have dropped our rank to 132! In 2015, a swing of $10 Million would have only resulted in a rise of only two places in rank from 112 to 110. An endowment of $10 Million less would have kept UofL at exactly the same rank of 112th!

Looking at market values and ranks from another perspective, the decline in rank from our high of 87th in 2001, to 112 in 2015 represents a spread in market value of $214 Million in 2015 dollars. To that we must add the unknown impact on our endowment rank of the $160 Million decrease in endowment that has been spent or acknowledged as lost in 2016.  A final accounting has not yet been made public. Extrapolating, our rank in 2016 will likely be around 137th.

Comment.
I do not claim that this analysis is the best way to evaluate the financial health of a University or its endowment. Accounting methods are certainly different among the schools and in the same school over time. It does however, offer credence to statements that our endowment has dropped substantially. The fact that our rank has been falling in comparison to other institutions is compatible with spending too much of the principal every year, of bad investments, or worse.  I personally do not see much evidence of what was claimed to be a successful Billion-dollar fundraising effort. I naively thought that effort was intended to raise our endowment.

Who would not want to see a fair accounting? Thanks to the determined  intervention of a revitalized Board of Trustees at both the University and the Foundation, we may yet get that view! The Governor’s aggressive efforts to undermine the efforts of these Boards at a time when the University and its Medical Center are on their knees should be discouraged if not condemned. His actions alone have caused the UofL’s accreditors to place the University on probation. In this regard, I encourage my readers to also read a justifiably critical editorial in today’s Courier-Journal written by the current President of the UofL’s Student Government and who represents UofL students the Board of Trustees.  I could not have said it better.

[Addendum Dec 9, 2016: My aging brain forgot that I had seen an important article by Andrew Wolfson that brought most of these matters relating to the University’s endowment to the public’s attention last September 10.  He covered the recent years much better than I did!  His article made the Foundation so nervous that at Dr. Ramsey’s request, it distributed to Foundation “friends” a list  of all the written questions (which I do not have) asked of them by Wolfson together with their answers.]