Elvis has already left the building!

Andy Wolfson of the Courier-Journal updated us on the status of Kosair Charities Foundation’s lawsuit with a peek at Norton Healthcare’s countersuit. It is amazing how different things can look when both sides of the story have been heard. I won’t go into additional details here as I have not yet seen the full brief myself. As was also the case in the tag-team lawsuit stemming from the University of Louisville’s attempt to evict Norton from its Children’s Hospital, attempts by the court and encouragement from the Commonwealth to have the matters settled by mediation failed. Frankly, this was not a surprise to me. It was made clear to anyone who can read that UofL wants to present a children’s hospital to its new clinical partner, Kentucky One Health. It is also obvious that the University has already wooed Kosair Charities away from Norton. Mediation only works when both sides are willing to compromise. All I see is scorched-earth tactics. In my opinion, UofL has been burning its bridges to Norton for years. In partnering with KentuckyOne, it put alligators in the moats.

Kosair Charities got a lot for its money.?
Surprising to me was how relatively little Kosair Charities paid over the years for naming rights for Louisville’s children’s hospital. Two or three million dollars a year is a relative pittance compared to the mega-millions of uncompensated and charity care provided by Norton Healthcare and the Commonwealth of Kentucky. I suspect that Norton can do quite well without Kosair Charities. Some 22 Shriner’s medical facilities around the country underwrite the total medical bills for all their patients, albeit in the organization’s limited service hospitals. In 2011, the Shriners Hospitals for Children network is said to have assets of $8 Billion. UofL wants Kosair Charities money to bankroll its commercial research and clinical programs. In my opinion, Kosair Charities in Louisville was getting a great deal for the right to raise money in the Hospital’s name and for the photo-op of handing over a big (in physical size) check.

When the hat is passed…?
Children and their illnesses are often used for fundraising. When the Arthritis Foundation lobbied Congress for favorable infusion payments for medicines used primarily for adults (and which have put rheumatologists at the top of lists of Medicare payments to physicians) it escorted children with arthritis to congressional offices. Who wouldn’t want the best for kids? It’s the Jerry Lewis approach to fundraising. It works. Perhaps Kosair thinks it can do better raising money for research under the University’s brand. Kosair Charities has asked for a special master to inspect Norton’s books. In fairness, Kosair Charities should open its books up too, as should UofL.

New homes for Elvis.?
Of course, I can hope for the miracle that the parties will put the interests of our children ahead of their own, but I fear that the horse is already out of the barn. Proof that transfers of allegiance have already occurred are evident in the travels of the iconic statue often referred to as the Silent Messenger. I fondly called him Elvis. In my memory he has always stood in front of Norton-Kosair Children’s Hospital with a child in his arms and carrying unused crutches– an image right out of Charles Dickens’ Christmas Carol. When I went looking for Elvis a few weeks ago, guess what— he was gone from Kosair Children’s Hospital! 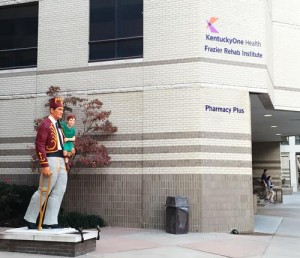 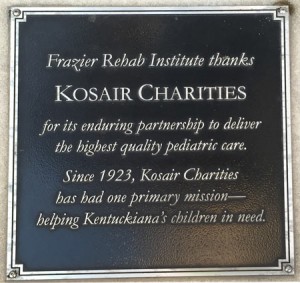 Perhaps he left earlier when renovations to Children’s Hospital began, but they are completed now and he has not returned. I found him next door at KentuckyOne Health where on a plaque Frazier Rehab Institute thanked Kosair Charities for “its enduring partnership.” There was no mention of the decades of association with Norton Healthcare or Kosair Children’s Hospital. What is more, Elvis had been cloned! His new twin now also stands at the entrance of the newly-named Kosair Charities Clinical & Translational Research Building– UofL’s principal commercial research facility. Its plaque recognizes Kosair Charities for its generous support of the Pediatric Center at the UofL James Graham Brown Cancer Center. In my opinion, this is a clear signal that UofL wants to draw pediatric patients with cancer away from Kosair Children’s Hospital— just what the community needs. No doubt we will see yet another statue when-and-if the new Kosair Charities/ UofL pediatric outpatient clinic is built.

Frankly, I was never a great fan of the statue. As an old rheumatologist, I hated the crutches and the use of the word “crippled” — once used often in fundraising campaigns for musculoskeletal illness. The word bespeaks dependency and gratefully is uncommonly used any more to describe disabled people. What is at risk of becoming crippled in Louisville today is a Children’s hospital that has served our community well. As it happens, Elvis and his passenger were modeled after real people captured in a photograph. I wonder what Albert and Bobbi Jo would have to say about the conduct of this infelicitous affair. I would like to think they would be disappointed. I am.

Addendum:  After I wrote and posted the article above, I obtained a copy of Norton’s Counterclaim.  Read it for yourself (3.1 MB).  Its accusations are pretty specific and seemingly well documented. In my own mind it reinforces my belief that if an opening of the books is called for, it should be fully reciprocal for all parties. Additional court documents assembled here.