Effect on traffic remains to be determined.

Traffic has indeed been a mess at the site of the new Robley Rex VA Hospital  building site for the last few months as shown by videos on YouTube and in other ways.  Since the whole intersection of the Waterson Expressway with Routes 42 and 22 has been under construction, this should have been no surprise.  Now that things have settled down, a fairer assessment can be attempted.  For those who have not driven through the area recently, these photos  taken mid-day on Monday, November 19 will show the new configuration. Click through the images for larger sizes, or for maximum size, download.

The image above is a panoramic view of the three roads meeting at the entrance to the new VA. (See Google Map.)  My back is to the VA entrance. To my left is the exit of the new slip ramp which allows cars to join Route 22 (Old Brownsboro Rd.) and continue away from Louisville without having to enter the traffic of Route 42. (Brownsboro Rd. begins in Louisville proper as Rt. 42 until it becomes Rt. 22 at the intersection we are discussing here. Route 42 continues unnamed as it goes out to Prospect and Oldham County.)

Directly in front of me above is Northfield Dr, a short stretch of Route 22 that intersects and crosses Route 42 and continues as the entrance to Northfield  To the right, Route 22- Brownsboro Rd. travels up past the Holiday Manor Shopping Center complex and Ballard High School to intersect with Seminary Drive and continue east. (Seminary Drive is the main feeder of inbound traffic from Rt. 22 onto Rt. 42.)  The orange barrels and cones show lanes are currently blocked but which will be dedicated to serve traffic coming and going from the VA property.

Here are some closer views. 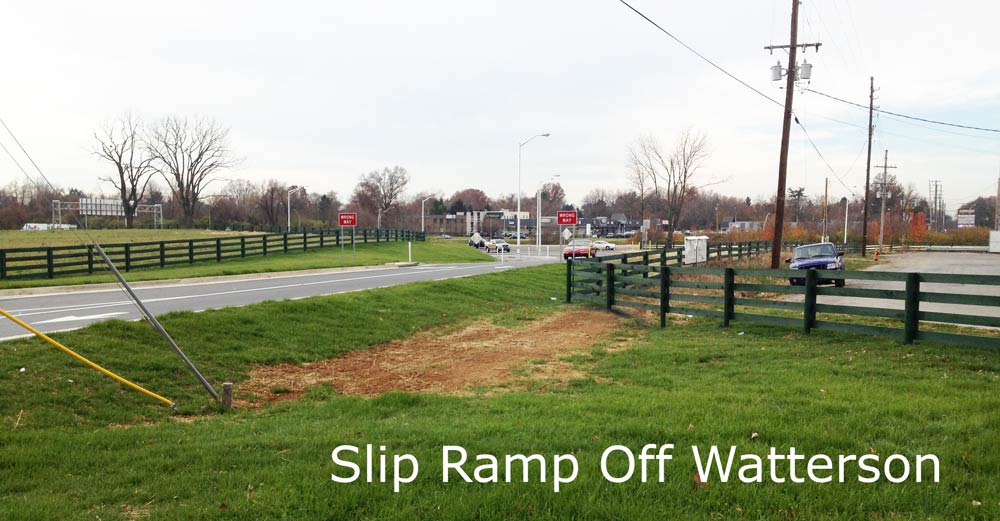 Above is a view from the Dairy Queen corner of the slip ramp and an approaching red car.  The ramp peels off the main Rt. 42 exit rather than directly from the Waterson itself. (See below.) 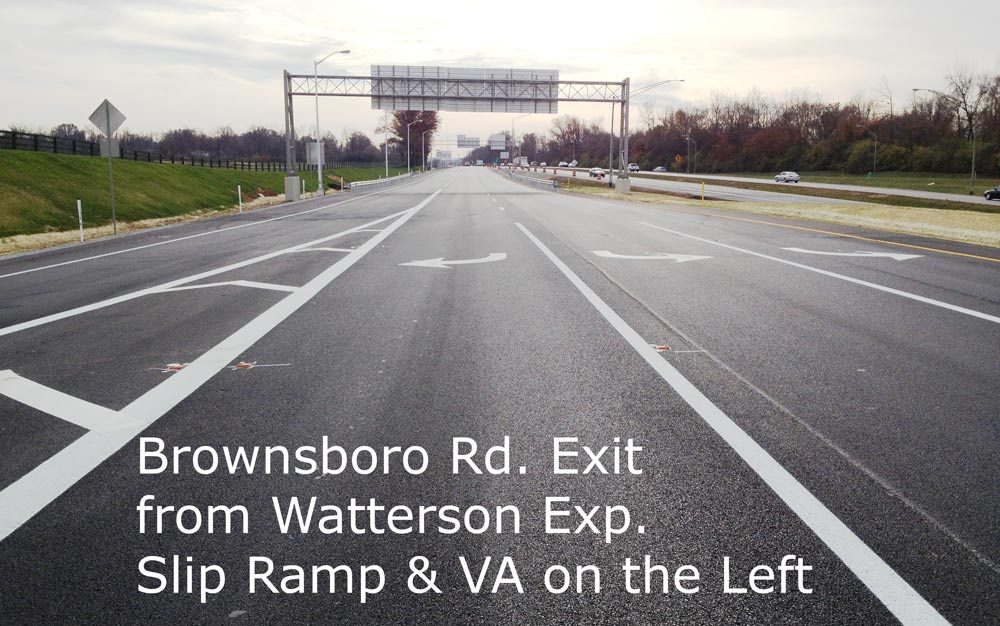 Looking above into approaching traffic exiting from the east-bound Watterson, the slip ramp is peeling off on the left side of the photo. Turning around, the photo below shows the continuation of the main exit onto Route 42 into four turning lanes. The slip ramp has already curved away to the right. The Goodwill Industries building is seen on the right.  It is obvious that on this mid-weekday, I did not have to dodge many cars. 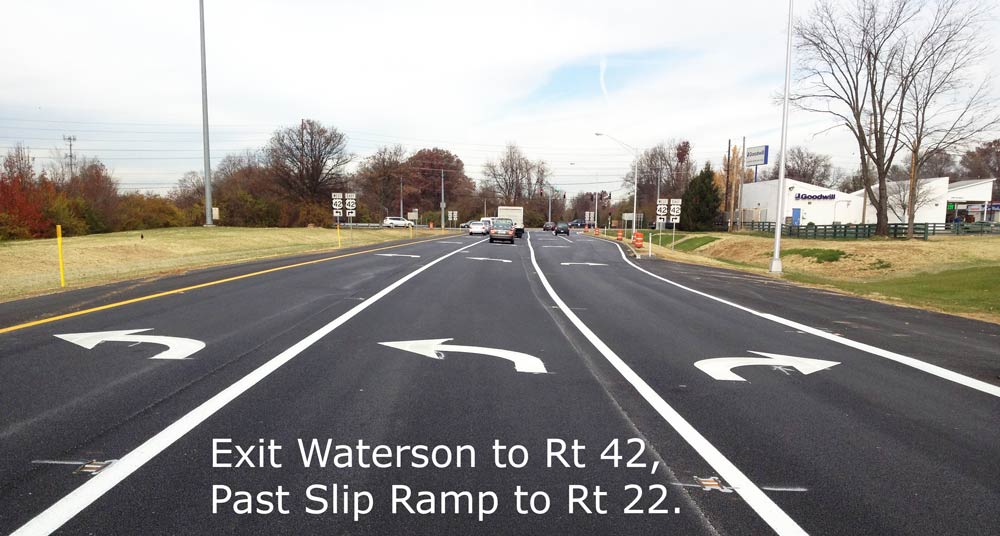 A car arriving at the VA intersection from the slip ramp would continue straight out Rt 22 passing along the right side of the island in the photo below. No turn is necessary. 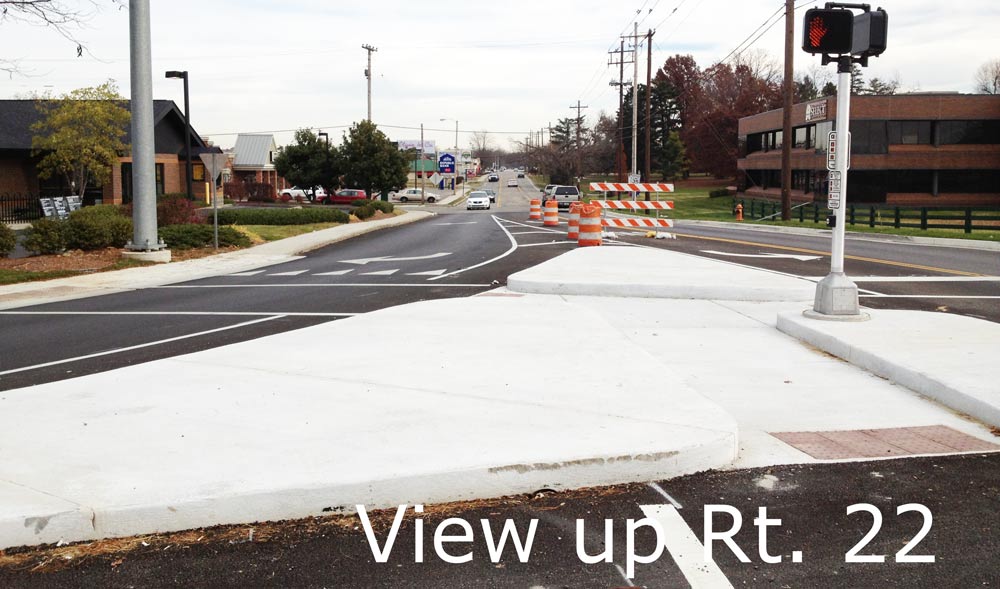 Turning 90 degrees to my left from the photo above, here is the approach of Northfield Dr./Rt 22 to the new intersection with Rt 42 proper. The lanes blocked with barrels will allow traffic directly to and from the VA entrance. 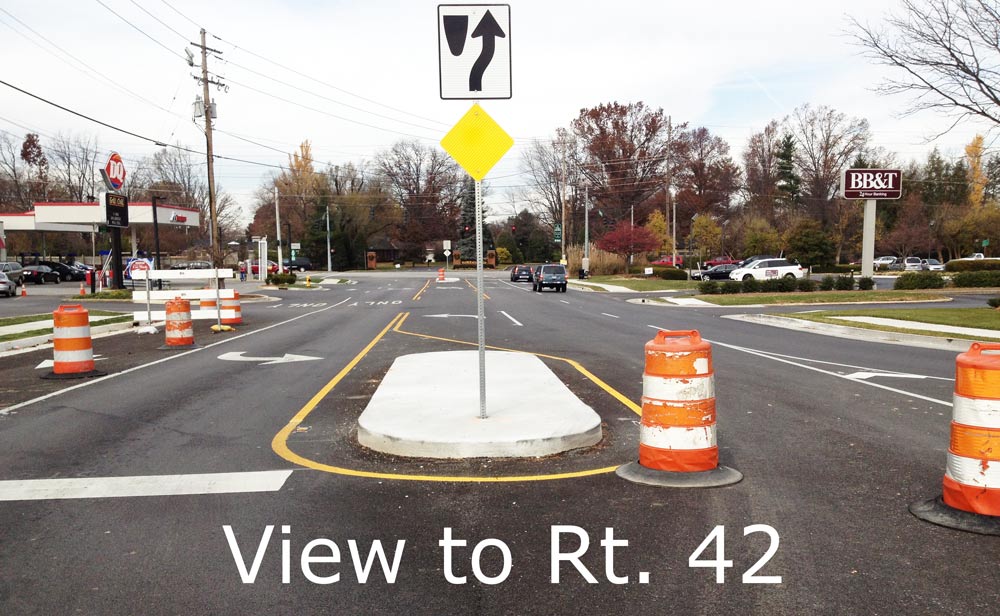 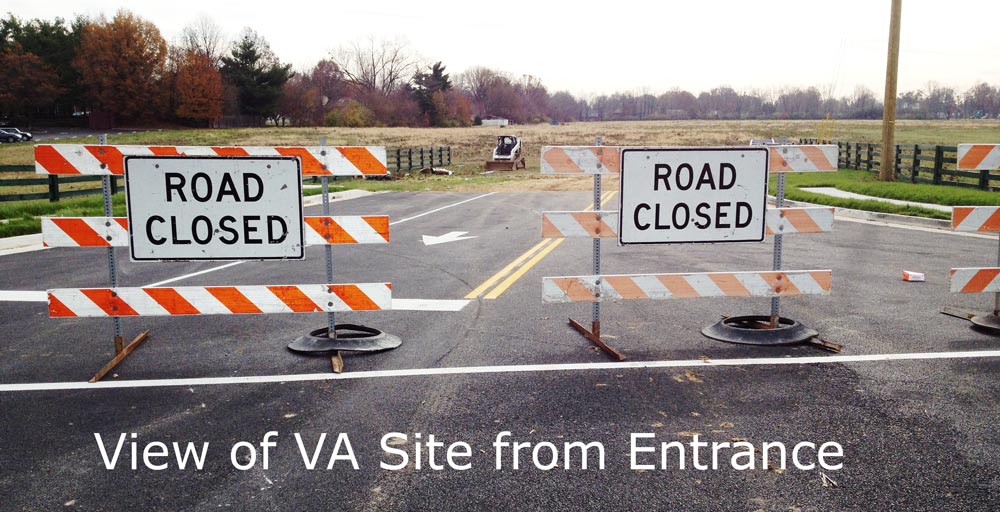 So how bad is traffic really?
I go through this intersection often, although not usually at rush hour. I must say, that other than at rush hour, traffic does not seem bad.  In fact, it is much better than it used to be before the Waterson intersection with Westport Rd opened up. Then, even in mid afternoon, outbound traffic on Rt 42 would back up to Blankenbaker Rd. and before. Last week I drove out to Norton Hospital Brownsboro at 7:40 in the morning.  I cruised through the Waterson intersection, past the new light at the VA, out Rt 22 and beyond.  I was obviously moving in the opposite direction of most traffic. During the morning rush hour, traffic coming in on Rt 42 from Prospect backs up at the row of lights before the Waterson. However it had cleared up pretty well by 8:30.  I have not yet seen what happens at the end of the day when eastbound cars exit the Waterson to continue out Rt 42 to the suburbs. [It was amazingly good at a next visit. I will report later.] During the construction, that back-up was awful. Recall too that hospital shifts change at times other than rush hour.

Road construction is still ongoing to the Waterson and I-71 with widening of the exit and entrance ramps to facilitate traffic.  I suggest that arguments based on traffic burden include the results of the current do-over. We don’t have to make it seem worse that it is.  I am reminded of the warnings of doom about plans to add a sidewalk and a turning lane to lower Brownsboro Rd.  I think the results of that project turned out pretty well.

Twenty-eight years ago I lived in Prospect and commuted to Louisville. In my years in Louisville I saw the traffic grow much heavier at the Waterson-Brownsboro intersections.  I also saw all the farmland outside Prospect fill in with housing development. I do not think our community has yet solved the problem of how to deal most effectively with our suburban growth.  (There are worse intersections than the one at the Waterson and Rt 42!) One solution has been to grow business centers outside the Waterson and Jefferson Expressways.   If downtown Louisville wants to survive,  It is likely that we have not seen the end of road building or new approaches to getting people to where they need to be.

For a full-size image of the panorama above, download from here.