Hundred’s of plaintiffs and a 70% drop in angioplasties.

We have known for some time that King’s Daughters Medical Center (KDMC) in Ashland Kentucky (Boyd County) has been under investigation by the Federal Department of Justice for the spectacular number of invasive cardiac procedures performed on its premises. In fact, the rate of angioplasties in that small city was one of the very highest in the nation and the highest in Kentucky. When other hospitals in Kentucky and elsewhere with seemingly anomalous high rates were looked at more carefully, it was found that that many, if not a majority of the procedures in some hospitals were not medically necessary or were even performed on normal or near-normal people!

The extent and progress of the federal investigation at KDMC is as yet unknown but it was not a complete surprise when a civil lawsuit was filed last September in Boyd County Circuit Court. It alleged that a medically unnecessary procedure with placement of a stent was performed in the hospital by its principal cardiologist, Dr. Richard E. Paulus, whose practice reportedly had been purchased by the hospital.

New lawsuits against King’s Daughters.
Earlier this week, a pair of related lawsuits listing some 42 pages of plaintiffs was filed against the hospital, Dr. Paulus, and a variety of business entities operating under the umbrella of the Kentucky Heart Institute. Naturally, a lawsuit tells only one side of the story, but given the precedent of essentially identical scenarios at other hospitals, including St. Joseph In Maryland and St. Joseph London here in Kentucky, the story is believable. The complaints themselves can be downloaded below.

Precedent at another Kentucky hospital.
St. Joseph London recently settled with the Justice department over essentially identical claims but admitted no wrongdoing. One of the doctors involved is currently serving a 30-month jail sentence. Additional investigations or prosecutions related to the hospital are still open. St. Joseph London is a small hospital that was doing more cardiac procedures that might have been expected for its size. When at least one of its physicians’ practice was examined by the Board of Medical Licensure, a scathing report resulted. In my opinion, an objective piece of evidence that something bad had been going on was that when hospital and its doctors knew that the somebody was looking over their shoulders, the number of angioplasties fell dramatically. From a near high in 2009, the number of the most commonly performed angioplasties at the hospital fell by 62% over the next three years. Click on the Angioplasty-abuse category button to see earlier articles on this topic. 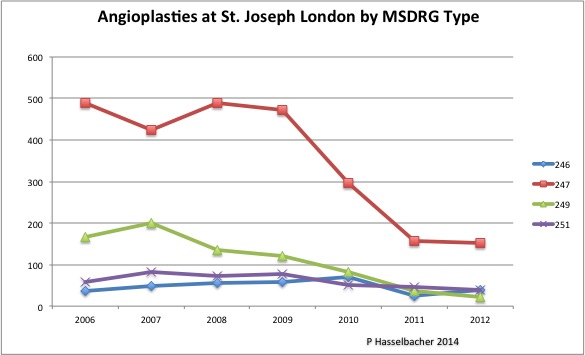 [Click on the charts to see a full-size PDF with all the data and explanations.]

Of course, other explanations for the drop are possible including that doctors were cowed into delivering suboptimal medical practice by an overly-aggressive court system and Medical Board. Having read all the public documents available to me, I cannot accept that explanation.

Garbage in– garbage out.
Of course one must always be concerned about the quality of the information being analyzed. If fact, I discovered a systematic error in the on-line KHA Hospital Discharge Database for the year 2011 that returned double the actual number of all angioplasty MSDRGs for all hospitals in the state. It has been repaired since. Relying on the earlier inaccurate numbers, I underestimated the drop in procedures at St. Joseph London, and puzzled over an otherwise unexplainable statewide increase for that year. When the results for 2012 are added and the data for 2011 corrected, the drop in procedures at St. Joseph London Hospital became even more dramatic.

Angioplasty History at King’s Daughters.
At King’s Daughters, the decline in the number of angioplasties was even more dramatic than at St. Joseph London. Between 2009 and 2012 there was a 71% fall for the most common procedure codes with no evidence of leveling off. (See PDF document here.) The decrease was most pronounced in those patients with the least complicated conditions (MSDRG 247), but also occurred in patients with major complications and co-morbidities. The hospital appears to be losing business in all categories of disease severity, perhaps to other centers. 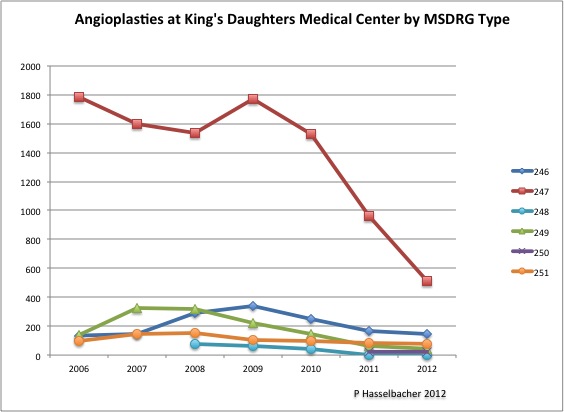 Show me the proof.
Disturbingly, it is being alleged that other medically unnecessary invasive cardiac procedures were being performed at KDMC including open-chest coronary artery bypass, and the insertion of implantable pacemakers and defibrillators. It will of course be important to see the evidence supporting these claims. (Any actual evidence that might have exonerated St. Joseph London Hospital was never made available to the public during the litigation, and perhaps never will. That is unfortunate.) The new lawsuits against KDMC comment that the hospital is unwilling or unable to produce its medical records for discovery.

Effects on other hospitals.
These two sets of litigation in Kentucky, and similar events in other states are sending ripples throughout the Commonwealth. Many hospitals came to look at cardiology as a cash cow. The temptation is strong to push the volume of those services to, and even beyond what is medically justifiable. This is particularly troublesome in the new world of medicine in which some cardiologists and cardiac surgeons are becoming actual employees of hospitals, and in which their salaries are linked to “productivity.”

Angioplasty history in Kentucky.
Below is a plot of the number of the most common angioplasties for the entire state of Kentucky according to the current KHA Database. There has been an overall decline in total numbers of angioplasties since 2006, including a 31% decline between 2009 and 2012. Note however, that 50% of this latter decrease is due to the decreases at St. Joseph London and King’s Daughters alone! Without those 2170 fewer cases, the statewide decline is a more modest but sustained 16% over that period. I do not have data in hand for years before 2006 when angioplasties were double those in 2012! (View a PDF document with all the data here.0 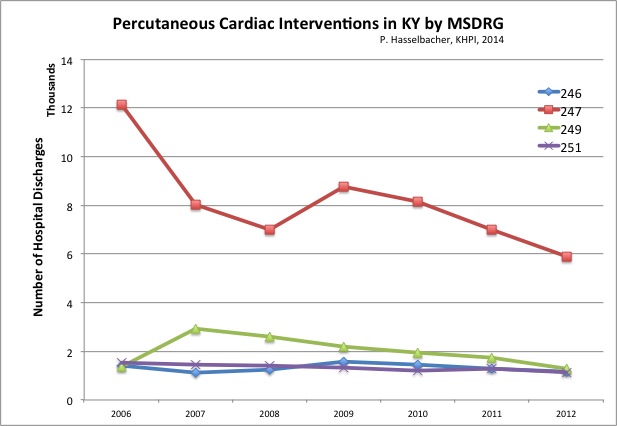 The healthcare bubble is bursting.
Hospitals like the two highlighted above that built spanking-new cardiac facilities, and either hired cardiologists or entered special relationships with them, must have assumed that revenues from cardiac services would continue to flow freely. The bubble burst and they and their communities must be nervous. The bondholders for those two institutions certainly are– and for good reason. The ratings for KDMC bonds were downgraded last fall in large measure because of decreasing cardiac patient volumes and revenues. Even the bond ratings for Catholic Health Initiatives, the parent company of St. Joseph London, have taken some hits. The impact of the ongoing civil lawsuits and federal actions on these institutions is unknown but likely to be profound. The impact on reputation of the institutions, likely to persist for several more years, will tend to pull down revenue for other kinds of medical services also. Other hospitals are watching and either learning or worrying!

Is everybody doing it?
The overarching disappointment for me and others is how such actual or alleged activities could have been going on for so long without anyone saying anything. Sadly, this seems to be a widespread problem. Abuse of the medical system by the few unscrupulous physicians or administrators may not be restricted to rural areas or small cities where it may be easier to hide. Just this week, the Bloomberg News organization published yet another angioplasty-abuse broadside with very troubling implications, this time against Mount Sinai Medical Center, one of the most prominent academic medical centers in New York City. (This institution was visited by senior officials of the University of Louisville and Jewish Hospital for advice on how to grow their own services.) The Bloomberg report, in my opinion, was not a pretty one. Any hospital performing large numbers of cardiac procedures must now proceed assuming that they will be carefully watched. Unfortunately, such scrutiny appears necessary. Some will blame any subsequent drop in revenues on Obamacare!

Mapping good and bad medical practices.
The actual and alleged scandals above occurred in institutions that stood out like sore thumbs on a geographic map of the frequency of angioplasties. Sore thumbs deserve a diagnosis but not all will be caused by medical malfeasance. Nonetheless, when other hotspots of angioplasty in the country have been examined closely, bad things were there to find. I will show examples of this phenomenon in later articles. 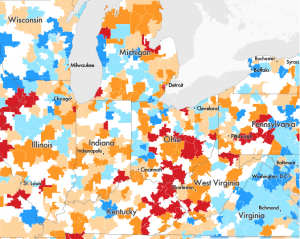 Who can we trust?

We all deserve to have confidence in the hospitals and providers we turn to when we are sick. The two Kentucky hospitals above made much of their excellent safety and quality ratings by outside organizations. If even these highly promoted indicators of good medicine failed, how are we to know whether our trust is deserved? I suggest that despite all the national emphasis on paying for value, quality, safety, accountability, and all the other great and mostly untested theories of how to provide better medical care; that we have a long way to go to get the healthcare system that we deserve and can afford.

As always, please bring any errors of fact or interpretation to my attention, and tell us all what you think in the comments.

[Addendum] PDF versions of the two new complaints can be downloaded here.  The appendices containing lists of procedures done were deleted to reduce file size

The first complaint of September 2013 is available here.
Huron v. KDMC and others. (PDF 2.1 MB)