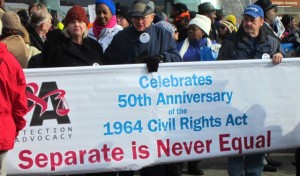 Yesterday, along with thousands of others and 50 years too late, I went to Frankfort to participate in a celebration of the 1964 March on Frankfort. Ironically, and belying the opinion of some on the US Supreme Court who must willfully be wearing blinders, the principal issue of protest yesterday was of voting rights– the restoration of suffrage to felons who have paid their dues to society. Many in the huge crowd also carried signs protesting the Commonwealth’s intention to appeal last week’s Federal Court decision requiring Kentucky to recognize legal out-of-state same-sex marriages.

Innumerable signs carried by the crowd recognized heroes of Kentucky’s”s civil rights movement and identified current obstacles to full implementation of basic civil rights for all citizens. These tangible aspects of the march are symbols of the slow but inexorable progress towards the ideals that underlie American culture, but which were imperfectly implemented by the first version of our Constitution. I was even more moved however, by unexpected portents that arose along the route of the march.

As we gathered in the cold on Second Street at the foot of Capitol Avenue, the white stone dome of our magnificent Capitol Building was partially obscured by the freezing mists of the Kentucky River Valley. By the time we reached the top of the hill, the fog had lifted and more than our hearts were warmed by bright sunlight. The tears seen in the occasional eye were not caused entirely by the cold. There were many in the crowd who had made that very same assent 50 years earlier. Their reception by both Mother Nature and by the Commonwealth was very different this time.

I do not know the mix of people who marched 50 years before, but in the crowd around me, the number of black and white folk was nearly even. The most palpable and touching symbol that things had changed for the better in 50 years, and which brought to me both laughter and a tear, was that for two long blocks up Capitol Avenue, the curb was lined with grade-school children from the neighboring Second Street Elementary School waving at us. What a great civics lesson for them and for us. How many more generations will it take for us to work through as a nation the poison of our imperfect beginning? We are not there yet. The black Civil War enactors who carried the colors at yesterday’s ceremonies reminded me that former slaves were still alive in my lifetime, and lynchings were still occurring. It is easy to see that things have gotten better in 50 years, but from my own default glass-half-empty frame of mind, we have only just begun. 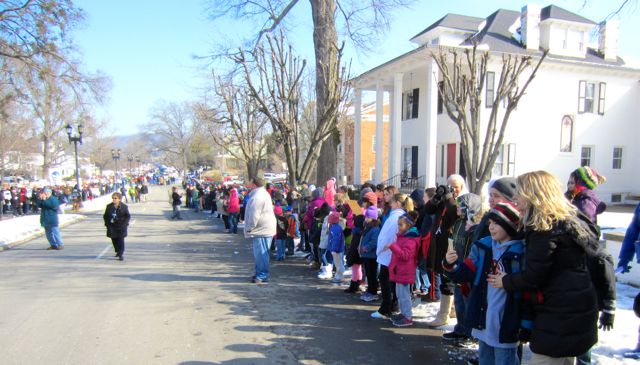 In contrast to the heartwarming response of the children, on the other side of the street, a large wake of vultures was ascending in the warming air from their roost a few blocks over and causing a few ironic chuckles around me. I saw in the birds a reminder that while there are many of good will serving in our government seeking to do the right thing, there are others who, in order to keep their well-paying and self-serving positions, remain willing to accommodate, appease, and even pander to the baser elements of our natures, perpetuating the injustices that brought good-hearted people to Frankfort fifty years ago and yesterday.

Why is this account in Health Policy Blog?
Those who lack full civil rights will never fully receive the benefits of modern health care enjoyed by the rest of us. Separate is never as good as equal. Those who have read earlier articles in this series are aware of my belief that healthcare in Louisville is still segregated. Black people and poor people go in one door to receive health care from less experienced professionals in settings avoided by those who can do so, while white people and those of means go through another door and are provided a very different kind of service. I have argued that as a community, we have institutionalized this disparity. Is there anyone who disagrees with this assessment? I beg to be proven wrong. If there is any justification for our two-tier system, bring it to light to be discussed publicly. Help find a better and more just way to provide healthcare to our community. The way we access healthcare is changing rapidly for all of us. Now is the time to take control of our communal destiny and to achieve an effective, efficient, and just path to good health for all citizens.