Spoiler Alert: Its not really about African-American representation on the Board of Trustees.

The chaotic goings-on within in the administration and Board of Trustees of the University of Louisville (and therefore also it’s academic medical center) increasingly resemble the plot of a television soap opera.  In the setting of a succession of embarrassing external audits, criminal convictions, and a revolving door of questionable executive and lower-level hiring and firings; the senior executives of both the University itself and the Medical Center are struggling to keep their jobs.  The former wants to manipulate the composition of the University Board of Trustees in his favor, and the latter is under investigation by the FBI and has not been heard of for weeks.  I am not alone calling for resignations.  It appears that the opportunity for face-saving transitions has passed.

The most recent plot twists include the Sombrero Affair over which President James Ramsey and his handlers were accused of ethnic insensitivity.  In all honesty I cannot say I was initially terribly critical of the costume-wearing.  I have done and said stupid and insensitive things myself – and after all it was an ethnic holiday.  Even a Pope is willing to be photographed wearing handsome sombreros.  What did bother me was the awkwardness with which an initial half-way apology worked its way through the University’s public relations machine, and the way aggrieved students felt they were being 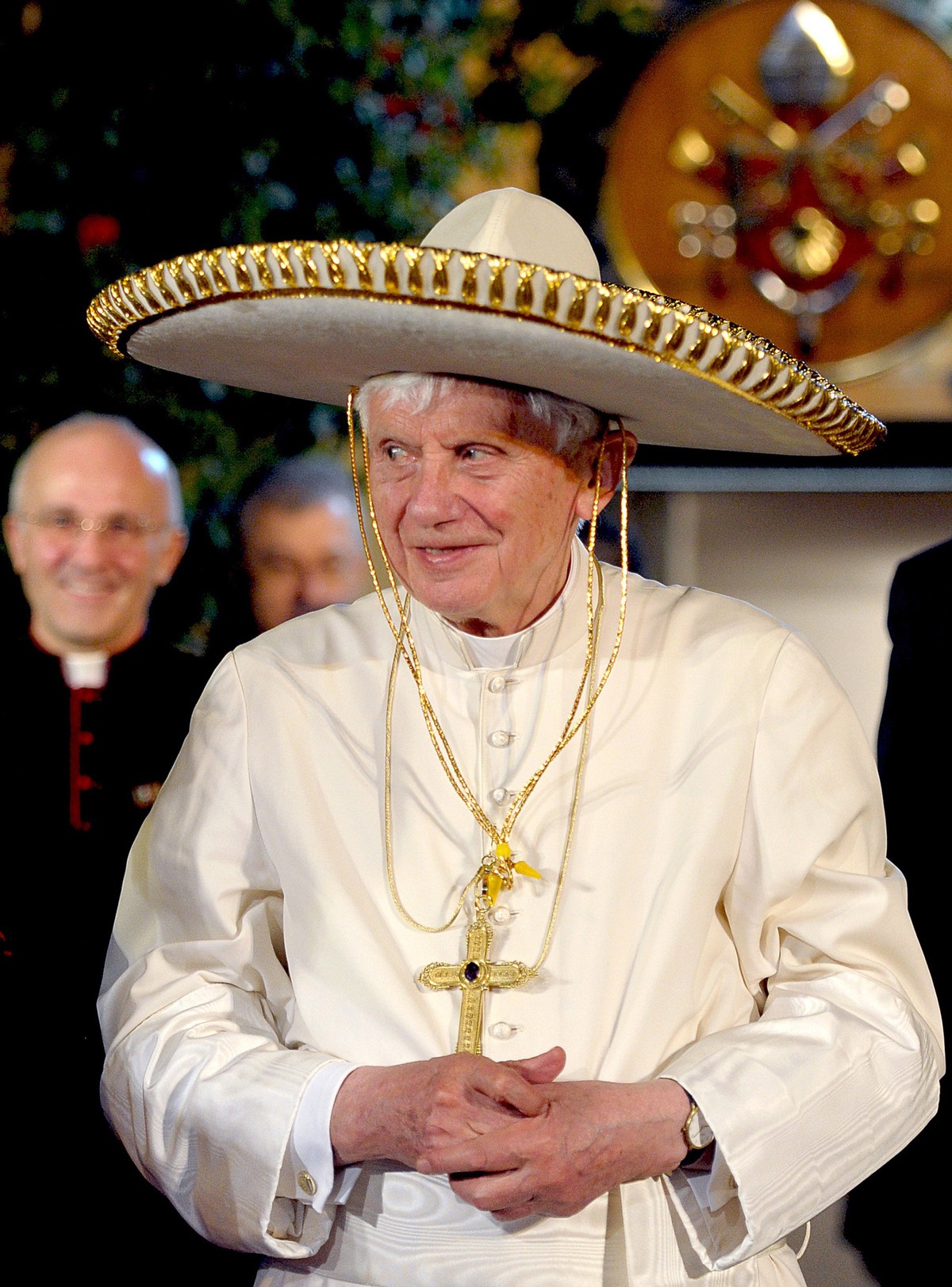 handled.  The President’s public declaration that he prayed to God over the matter brought images of tearful discredited televangelists to my mind – tacky, insincere, and inappropriate for a public institution.  In the minds of many Kentuckians this must have seemed acceptable, if not admirable.  What really bothered me was a report that in a meeting with aggrieved students, the President scolded that “If my god forgave me, I’m sure that you guys can, too.”  I hope this report was incorrect but I have not seen it refuted.  If true, the colossal arrogance of claiming to know whether or not God had forgiven him would be in my

opinion, compatible with other examples of the management style of this president. In my opinion President Ramsey was deflecting blame and responsibility away from himself and onto the students.  Please tell me this wasn’t true or was misreported.

A captain of a ship can only do so much.
In a large and diverse institutions such as UofL, it is impossible for any leadership to control the thinking, attitudes, speech, or behavior of all its students, faculty, or staff.  On the other hand, how a university handles ugliness when it raises its head is a critical responsibility.  In that regard, reports of how the University handled complaints of racial tension in – of all places- it’s honors residence are troubling.  It was over lack of institutional response to both perceived and real evidence of racism that ultimately led to the resignation of the President of the University of Missouri.  I will leave it to others to argue whether the institutions are comparable in this respect, but the untimely emergence of the dormitory issue at U of L appears as a bad omen to me.

Was there a meeting or not?
At least two respected journalists have affirmatively reported that President Ramsey met at his home over a recent weekend with Board of Trustee members friendly to him – presumptively to plot out an exit strategy for him.  The response of University spokespeople and the President himself has been an unambiguous, full-throated denial that any such “meeting” occurred.  I myself have heard that such discussions or negotiations have been going on for several weeks now.  I have no knowledge of whether the specific reported weekend meeting occurred or not.  This may well depend on the parsing of the words “meeting, visit, trustee, or friend,” all of which may coexist at the same time!  President Ramsey himself has brought up the topic of his resignation several times over the past few months, but he has dismissing that possibility in favor of dealing with a difficult budget, seeing the University through the sex scandal in its basketball program, and most recently, remaining until it’s “illegal” Board of Trustees is replaced.

Line in the sand or negotiating position?
President Ramsey’s most recent pronouncement is that he will serve out the remainder of his contract which ends in 2020.  My first impression was that he was angling for a buyout of his contract along the lines of the $multimillion precedents with Athletic Department personnel. In one of “The Godfather” movies, Michael Corleone was advised that the person who brings a peacemaking deal to his attention at the funeral of his father will be one of its conspirator architects.  Perhaps a Tessio in Louisville will step forward with a buy-out offer.  Others will argue that Dr. Ramsey has already been handsomely, if not excessively, compensated for his services.  Others wonder if he will yet be required to return some money if it was inappropriately justified in the University of Louisville Foundation’s tax returns.

Is the current Board of Trustees illegally appointed?

When the Board appeared to function as a rubberstamp for President Ramsey, he had nothing critical to say about its composition.  Now, with new Governor Bevin as an apparent partner, he would render it impotent by forbidding any action by the Board and removing its most recent appointees.  I assert that there is no legal basis for such action!

I have argued at length why I believe the nomination and appointment process for Kentucky’s state universities is flawed, overly political in nature, and intrinsically unworkable.  (In my opinion, as long as Trustees and Directors of the University’s various corporations and foundations get the best seats at its athletic events, that the academic mission of the University will always get second-shrift.)  The Governor, and now a me-too President, claim that the current Board of Trustees does not meet a statutory requirement that the minority racial composition of the Governor’s appointees be at least as high as the statewide proportion.  I suspect when the law was written, “minority race” was assumed to be synonymous with African-American or black.

It is a matter of undisputed fact, that following the last round of appointments in the spring of 2015, the only African-American member of the Board was its representative from the student body.  An African-American Board member from the citizenry who was eligible for reappointment was replaced by a person of Hispanic ethnicity.  This result led to active protests and a lawsuit.  An opinion from the Office of the Attorney General found that for the purposes of the statute, “Hispanic” qualified as a racial minority.  In a generous move, a Euro-American Trustee resigned his position allowing former Governor Beshear to appoint an African-American to replace him.  Subsequently, the Hispanic trustee himself resigned earlier this month allowing Governor Bevan to replace him – presumably with an African-American member. (I am not aware that any replacement process is moving forward.)  Such a replacement would give the current board two African-American members appointed by a governor with a third in the person of the student trustee.

What does the law say?
The Governor is claiming that the law requires there to be four African-Americans on the Board implying that the standard should be the African-American proportion of Jefferson County and its surrounds.  There is absolutely no such directive in Kentucky law – even if there should be!  Furthermore, the statute does not refer to African-Americans, Black Americans, or Americans of any color or race – only to “minority race.”  The statute is quite specific however that the standard to be met is a statewide proportion.  According to 2014 U.S. Census estimates, 8.2% of Kentuckians consider themselves to be African-American or only-Black.  Of the remainder, 88.3% of Kentuckians considered themselves to be only-White. The rest consider ourselves to be a mix of races, colors, and ethnicities that in my view confounds any biological significance of race.  We are dealing here with social definitions of minority.  It seems clear that those protesting the current racial makeup of the board conclude that only black trustees satisfy the law.  Assuming then that the makeup of the Board must match the state-wide proportion of black people, how many individuals are necessary to be legal?

We must first settle on the denominator of the calculation.  The Board has by statute 20 members, but three of these are appointed annually as representatives from the student, staff, and faculty organizations of the University.  These three positions are not gubernatorial appointees.  (An additional wrinkle is that of the 17, two must be appointed by the Governor from nominees submitted by the the UofL Alumni Organization and not by the state-wide Postsecondary Education Nominating Committee.)  It is self-evident that with respect to minority racial composition of the University Board, the statute controls at most, only these latter 17 “citizen” or alumni appointees.  Parenthetically, I find it bizarre that neither the Alumni Association nor the Nominating Committee are required by statute to provide an adequate selection of minority nominees for the Governor.  In my opinion, this is a manifestation of structural racism in action.

Running the numbers.
So, how many black people are enough?  I have already expressed my discomfort in doing such arithmetic.  I personally believe the Board should look and think like its community.  A board that is stacked with tractable political donors and friends is an anathema to this old academician.  Nonetheless, doing the math as it is prescribed by the statute, the minimum number of African-Americans on the UofL board should be 8.2% of 17, or 1.4 Trustees. This would round-down to only 1 trustee, or perhaps two trustees for some of the time.

For comparison, if we assume that the U.S. Census estimate for African-American or Black-alone for the whole of Jefferson County is 21.5%, then of the 17 citizen-trustees, a minimum number of 3.7 should be African-American.  Perhaps this is where Governor Bevin is getting his mandated number of 4.  I reiterate, there is no legal basis on which to calculate a minimum number in this way.

What if we take the opposite approach and lump together all minority races or combinations thereof and use that as the basis for minority representation?  Since 88.3% of Kentuckians considered themselves to be only-White in 2014, this leaves 11.7%  as other-than-White.  This approach still  authorizes only 1.99 minority trustees of the 17, easily rounded-up to two trustees, not four.  On the local side of such a hypothetical calculation, if we take the White-alone population of Jefferson County as 73.4%, then we should have at least 4.5 non-White minority trustees of whatever hue or ethnicity!  Why not?  It might be a good idea, but it is not the law.

Let make it very clear that I find making and rounding such calculations to be distasteful.  They remind me of the “Original Intent” of our Constitution that a black person is only worth 3/5 of a white person, or of metaphysical determinations of how many drops of blood it takes to justify discrimination against or even murder of an African-American or a Jew.  Of course there can and should be more than two African-Americans on the UofL Board of Trustees, but this is a matter of justice and equity, not of law. Skin color must not be used as a pretext to silence a questioning board or to stack it with political patronage.

I have argued that the nomination and appointment process is manifestly broken. Neither Governor Bevin nor President Ramsey are offering any fundamental reforms.  In my opinion, whether they are acting in collaboration or not, both are using the matter of minority presence on the Board for personal or political gain. These have not been our finest hours.