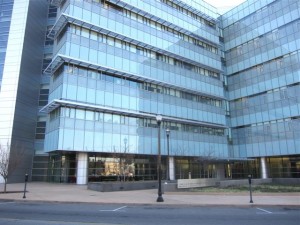 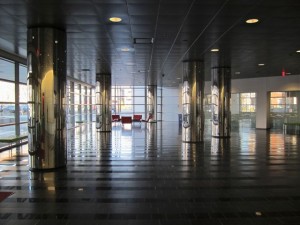 Investing In and Delivering Health Care Services, Education, and

Research in Conjunction with University of Louisville and University Medical Center

The University of Louisville and its Hospital have been seeking a new partner to help with their various diverse missions. I attended the Pre-Proposal Conference that was held today in UofL’s new, palatial, and seemingly unpopulated Transitional Research Building. This meeting is a requirement of Kentucky’s contracting and purchasing regulations. In addition to University folks that I recognized, there were perhaps 10 or 11 other individuals. The audience included representatives from Baptist, Norton, and KentuckyOne Health. There were two or three people whose affiliation was unknown to me. The meeting began with introductions of the 5 panel members from UofL and its Hospital: Attorney Glenn Bossmeyer, Dr. Gregory Postel, CEO James Taylor, Facilities VP Steve Amsler, and Asst. Purchasing Agent Curtis Monroe. (Mr. Amsler was previously Vice President for Facilities at Jewish Hospital/St. Mary’s. I cannot recall that he said anything at the conference. Neither did I recognize any questions asked by representatives of KentuckyOne.)

For the first 11 min of the 30 min meeting, the front-matter of the RFP was reviewed. This comprised details of the form, conduct, and deadlines of the RFP. Nothing new here. The deadlines are stunningly brief for a project of this size. Applications are due only 3 calendar weeks from today on March 22. If there are any additional questions, they may be submitted in writing before one week from today and “they’ll get back to you” hopefully by the 9th or 10th of March. It was suggested that 10 to 14 days after submission, decisions would be made about who would be invited back for further discussion. A final decision is targeted for April 16. It was said that the final date was subject to change.

Compounding the short timeline were obvious barriers to obtaining any or all additional information. Additional questions must be made in writing and these would be answered on the University website all at once for the benefit of all applicants.

One questioner asked for finance and balance sheets for the hospital and was informed by the University’s agent that he had not gotten that information. Another question was asked about what the proposed needs for capitol improvement mentioned in the RFP were. The answer was, “submit the question in writing.” [I confess to being surprised that such essential information would be so hard to get.  It should be noted that to my knowledge, the University never mentioned what it would do with the CHI money except that it was not going to be used for indigent care, and it would support getting a National Cancer Center designation.  To my ear it all sounded like research uses.]  Another audience member asked for some of the information that would have been previously shared with Catholic Health Initiatives and Jewish Hospital/St. Mary’s to “put all on an equal footing.” The answer was that to the extent the information was subject to an open record request, it would be provided. Still another audience member asked how the several Schedules and Exhibits to the Affiliation Agreement that was part of the RFP could be obtained. The answer was, “ through a formal Open Record Request to the University Presidents office.” We have already seen how the dogged adherence of the University to claims of immunity from Kentucky’s open record laws by virtue of its self-declared private status has been used to restrict the flow of information to the public and to make a mockery of the concept of transparency. I think we are still seeing it.

It was acknowledged that the University has been engaged in this process for the last 3 years. No mention was made of any reasons for the failure of the process except that that “the Governor failed to authorize” it. The University hopes to find a way forward that will be acceptable to governmental authorities that have a say. When asked if the University could be more specific about the nature of the relationships they wished to make as a result of the RFP process, it declined to comment. They were hoping for “answers” from the applicants.

I asked a question about how the current status of two unresolved lawsuits addressing the private or public status of UMC would impact the RFP process. The University’s attorney originally answered, “It wouldn’t,” although that comment was amended to explain that it would depend on the nature of what the final proposals are. Hospital CEO James Taylor suggested that the Governor’s authority over what was proposed previously lay in the requirement to approve a change in the lease of the hospital, and to approve the accompanying academic affiliation agreement. It is difficult for me personally not to imagine that the University believes it has found a way to structure its desired partnership in such a way that approval by the Commonwealth will not be required.

I must say that if I were a prospective applicant, I would have gained little or no additional knowledge of how to actually start writing.

In terms of specific items that had to be addressed in the proposal, attendees were referred to Item 5.0 in the RFP without further elaboration. These comprise some 22 bullet points that cover the waterfront of the activities and responsibilities of an academic medical center. Applicants were requested to respond to each explicitly and in detail. It seems to me that is more than a two-week task and requires detailed knowledge of the University’s operations.

One individual asked what would happen to existing relationships with other institutions. The University chose not to speculate on the matter. It can be noted that the University’s last proposed agreement was full of do-not-compete clauses. This does not bode well for cooperation among healthcare providers in Louisville or Kentucky.

The University admitted that its hospital has been making a profit.

When asked if the results of the current review by the AD Hoc Operations Review Committee of UMC would be available to inform the RFP process, the answer was that the results would be available to the public when the process concluded 60 days from now. Of course that date is after the scheduled completion of the RFP process. The UMC representatives would not speculate on how the information would impact the current process. (I have written about this specific issue in my summary of the first meeting of the Ad Hoc Committee.)

There was some discussion about the role of University of Louisville Physicians (ULP) in the new arrangement. This is the organization that is slated to incorporate the clinical practices of most of the current independent faculty practice groups. If and when completed, it will comprise some 600 physicians and make up the closed medical staff of University Hospital. It was said that the previously separate faculty corporations that billed for indigent care or in the teaching clinics would be incorporated into ULP. [Good for them.] The discussion of this intention to merge private and teaching patients into a single economic entity did not extend to whether or not such patients would otherwise be treated the same in terms of where they would be seen, or who would be involved in their care.

When one audience member asked about a statement in the RFP about services provided in Eastern and Central Kentucky, and in Indiana, the answer I heard was that this would be a requirement. My take on that exchange is that this geographic requirement could impose a significant limit on the number of possible applicants.

Given all the conditions placed on the RFP and the many restraints on the flow of information needed to perform due diligence, preparing and evaluating a response will be easier for entities who have been through this before.

I asked to be placed on the distribution list for answers to additional questions. If I get anything, I will share it here.

One thought on “UofL Meets Some Potential New Partners.”