A reader shared a notice that the Ashland doctor at the center of the angioplasty-abuse scandal at King’s Daughters Hospital was indicted by a federal grand jury for allegations of performing unnecessary cardiac stent procedures and associated billing fraud. If found guilty, he faces up to 15 years of prison and financial restitution and penalties. Dr. Richard E. Paulus allegedly participated in this scheme from at least 2008 when he sold his practice to King’s Daughters Hospital until 2013 when he retired. He preformed more cardiac stent placements than any other physician in Kentucky, and placed his hospital among the highest in the nation for the number of such procedures.

In 2014 King‘s Daughters had settled with the Justice Department for $40.1 million to resolve claims of false billing for medically unnecessary cardiac procedures.  This new criminal indictment of a physician involved represents another dimension of that investigation. Other civil and probably criminal actions are proceeding. Dr. Paulus has not yet had a trial and should be considered innocent until then. In previous federal settlements with the two Kentucky Hospitals accused of false billing for cardiology services, the parties were not required to admit guilt.  What are we to think? How bad is this?  Is it nothing more than reckless billing or perhaps over-aggressive law enforcement? I don’t think so and offer the following thoughts as opinions.

How long might this have gone on without data disclosure?
In an area of healthcare known to be subject to abuse, Dr. Paulus and King’s Daughters would have stood out like sore thumbs in private or public disclosures of healthcare utilization if such transparency had been available earlier. In many if not most such cases that have been investigated, fraud or bad medical practice has been the explanation for extreme outliers. Either way, such utilization stand-outs must be looked at as either shining examples of excellent medicine that draw patients from afar and which need to be emulated, or possible examples of overutilization or fraud.  We need more data about healthcare utilization such as that provided by Medicare or state agencies. Private payers have not been very forthcoming about how they spend out premium dollars. Some of those who control utilization data are dragging their feet or requiring us to pay.  For example, the Commonwealth of Kentucky refuses to obey a law that says it must provide a free copy of its all-payer healthcare utilization reports to people like me and you.

Data needs to be reliable and up-to-date.
When I tried to update the data I collected for my earlier articles on angioplasty-abuse more recent than 2012, I found that the 2014 Kentucky Annual Hospital Utilization and Services Report which used to track cardiac catheterization data, no longer does so. It refers the interested person to the Kentucky Annual Administrative Claims Data Cardiac Catheterization Report.  However, that document has not been updated since 2012.  The Kentucky Hospital Association portal for Kentucky hospital charge and utilization data is now current up to 2013, but I have discovered systematic errors earlier even in that database.  Accordingly, I will try update my charts through 2013 in an attempt to demonstrate whether angioplasty rates are continuing to fall.  If so, how will we ever tell the difference between an undesirable chilling effect of all the investigations and litigation, or an evolution of the directives of evidence-based medicine.

[Addendum Sept 14, 2015.
I was able to update the number of angioplasties performed in Kentucky’s hospitals through 2013 collectively and individually for a few.  Attached are the numbers for King’s Daughters.  The precipitous drop in angioplasty and stenting procedures in Ashland that followed the initial federal investigation continued through 2013 falling 80% from a high in 2009.  A decline in the number of procedures occurred in all six MSDRG categories. Although there has been a gradual state-wide decline in these procedures, this was much less than at either King’s Daughters or St. Joseph London.  In fact, half of the state-wide decline during this period can be accounted for by these two latter hospitals. In addition, there is little doubt that a secondary impact on the number of angioplasties occurred.  Other hospitals were watching the events in Ashland, London, and elsewhere and no doubt modifying their own activities when appropriate. I will present the full data in a later article.] 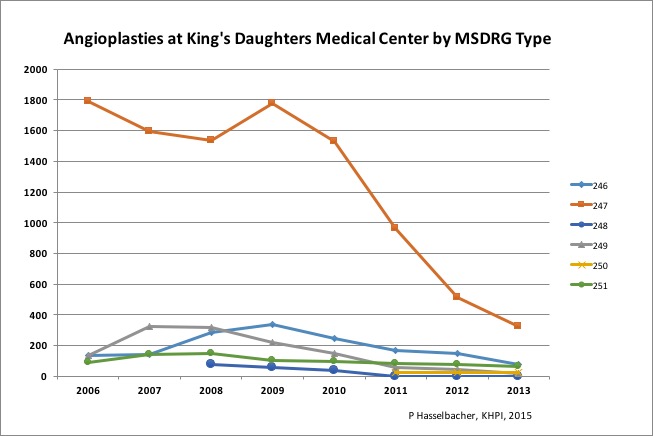 Bad, or really bad?– That is the question.
I am not sure how the medical malpractice or other civil actions against King’s Daughters or St. Joseph London are going.  The federal prosecutions surrounding these institutions focused on false billing claims or other financial improprieties.  Harmful medical practices are implied, but because the settlements were made without acknowledgement of guilt, and because none of the relevant medical facts were made public, we still do not have much insight into just how bad things were medically.  Were in fact stents being placed into normal arteries or asymptomatic people?  Were doctors simply practicing under the standards or guidelines of the time? Has all of this been part of the ongoing war between providers and payers to maximize revenues without any adverse physical of financial effect on patients?  Perhaps we will learn more from civil suits as they become public.  I will try to see what is out there. Can anyone point me in the right direction?

Finally.
Should hospitals be expected to recognize what is going on under their roofs, and not to close their eyes under showers of revenue?  In this day of expected attention to quality, safety, and cost-effectiveness, the answer is a resounding yes.  Frankly, is difficult for me to understand how such examples of fraud and waste such as are revealed nearly every day in the health care industry have been allowed to go on for so long. The language in the False Claims Act under which the settlements and prosecutions above are being pursued define “knowing” for the purpose of placing liability on a hospital or other provider includes “acts in deliberate ignorance of the truth” or “acts in reckless disregard of the truth… no proof of specific intent to defraud is required.”  Enabling policy or behaviors by the rest of us are not helping.