Opana ER is the brand name of the specific extended release preparation of oxymorphone HCL marketed by Endo Pharmaceuticals, Inc.  This was the drug of choice that underlay the explosion of opioid addiction and of HIV/AIDS and hepatitis infections in intravenous users in nearby Scott County, Indiana.  Opana is back in the news, but not in a good way for Endo.  The FDA assembled an expert review panel last week to opine on whether the benefits of Opana ER outweighed its risk to its users.  The short summary of its findings and recommendations is that the benefits do not outweigh the risks, and that the drug’s continued marketing should be controlled in a variety of possible ways including removal from the market, or restrictions on who can prescribe it and under what conditions.

To summarize the findings of the article below, Opana ER is not a big player in the prescription opioid market in any event.  Its active ingredient, oxymorphone,  is manufactured or distributed in the US by at least 19 different companies but fills less than 1% of opioid prescriptions.  (I must admit up front that have no idea who actually makes what pills or where the active ingredient in the various preparations comes from.) A detailed list of individual versions of oxymorphone by NDC from the labelers below is available here. (or here as Excel file.) It occurs to me as I see such long lists of labeler names, that with so many ways for a drug to enter the community, opportunities for diversion from supervised distribution become correspondingly more numerous. Given all the apparent distributors, is it even possible for an Endo or a Mallinckrodt to know where the drugs they might manufacture end up? Mallinckrodt in particular has been accused of not keeping very good track at all, at least in Florida. 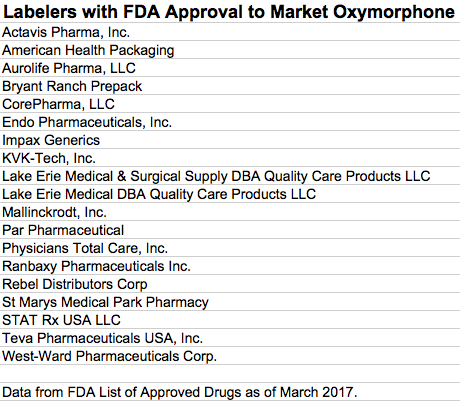 Although the marketing of its new allegedly “tamper-proof” formulation of oxymorphone in 2012 allowed Endo to continue to compete in the extended-release market, new forms of generic ER forms rapidly began to cut substantially into Endo’s market share.  The competition appears to have kept Endo’s prices relatively stable, but did not inhibit price increases for the generics.  Immediate-release oxymorphone still fills a significant role in the market and all but blows Endo’s non-ER version out of the action.  In my opinion, there are plenty of opioids to go around and Endo’s Opana ER would not be missed.  I look forward to other prescription opioids being looked at looked at using the same lens of benefit vs. risk.

A bit of history.
Opana has been a money maker for Endo Pharmaceuticals which is based in Dublin, Ireland.  Oxymorphone has had a checkered past. From the time of its initial clinical use, the drug was recognized to be highly addictive. Oxymorphone HCl itself (the basic ingredient) is a relatively short-acting opioid that gives a desirable rush to the an abuser, but whose analgesic effects wear off sooner than other commonly prescribed opioids. Extended-release preparations of the drug thought more appropriate for the treatment of chronic pain were manufactured. The result was more active drug in a single pill that resourceful addicts could utilize by snorting or injecting.  Attempts to manufacture more secure “tamper-resistant” forms culminated most recently in 2012 when Endo received FDA approval for a newly formulated, tamper-resistant form of Opana ER. Unfortunately it was not resistant enough, and opioid addicts such as those in Austin, IN soon found a work-around to extract the drug for intravenous injection. The result of lots of active drug in the spoon facilitated shared injections with the same needle and led to the predictable addictions and infections that justified the recent adverse recommendation by the panel.  As we will see below, an additional existential threat to Endo’s sales of Opana is the availability of generic forms of both oxymorphone and oxymorphone ER.   I do not have information about whether a ban on Opana ER will include all forms of oxymorphone– extended release or not.   Neither have I any idea who actually makes what pills or where the active ingredient comes from.  Is Endo’s Opana ER the only entity at risk from an FDA decision?  If oxymorphone were to disappear from the US market, who if anyone would miss it?

What can be said about Opana prescribing?
The occasion of the Opana ER review gives me another excuse to test the usefulness of Medicare’s Public-Use Part-D Drug Utilization Database. I have previously shown that prescribing patterns to Medicare patients are predictive of how opioids are prescribed to all patients.  Information available to the public about the utilization and cost of medicines has been sparse, if not suppressed. Financial information that is available is barely useable in the deliberately confounding world of coupons, discounts, rebates (a.k.a. bribes), copays, and the like.  Efforts to make average consumer prices available to you and me have been successfully beat back by the manufacturer and distributers involved. Against this background, what insights and perspectives might we gain by examining the utilization and cost of oxymorphone as it is being prescribed to elderly and disabled Medicare beneficiaries?  I was interested in what popped out, and I think my readers will be too.

[I recently did a repeat analysis of prescriptions for opioids in Indiana Medicare Part-D with a focus on oxymorphone and Opana. Eighty-four percent of Opana ER prescriptions in 2014 went to the disabled Medicare beneficiaries and remainder to the elderly. (Giving opioids to the elderly is not a good idea in any event. We get confused and fall down!) Curiously, generic hydrocodone/ acetaminophen was the only major opioid for which the majority of beneficiaries were the elderly.  This drug was by far and away the most common opioid prescribed– as it is in Kentucky. I would have guessed it to be the most abused.  Perhaps the liver-killing acetaminophen scares potential abusers or prescribers away. Any comments?]

More about Endo Pharmaceuticals.
According to the report by Jeanne Whalen in the Wall Street Journal, sales of Opana in 2016 were $159 million, but in 2015 Medicare alone, the total spending for Opana ER alone was over $146 million.  This is however, only a small fraction of Endo’s total 2016 portfolio sales which are said to have exceeded $4 billion.  Endo in one or another of its corporate entities markets only a limited number of drugs in the USA. It has a hefty presence in pain management drugs and controlled substances. I count 13 different drugs in the FDA database, half of which are used to treat pain or migraine headache including oxymorphone, oxycodone, and buprenorphine. The company also markets testosterone.

More people taking oxymorphone in some form.
Medicare data currently allows comparison of utilization of Part-D drugs in each years fro 2011 to 2015.  The number of beneficiaries enrolled in Part-D and taking either brand-name Opana or generic oxymorphone have risen modestly for both the regular and extended release versions. For example, over the 5 years, the number of prescriptions and refills written for oxymorphone ER rose from 323,415 to 404,807. For comparison, the number of prescriptions written over the same interval for the immediate-release version rose from 52,072 to 64,124. The number of unique beneficiaries and total spending for each of the versions rose comparably. [The full data from which the graphic below is derived is available in an Excel file, or as individual pdf files showing 5-years of extracted data for brand and generic individually or combined, or for 2015 alone.]

Marketing works.
Opana ER has held on to a substantial market share and a higher price over the generic during the five years from 2011 to 2015. It is clear however, that the generic ER form is cutting into Opana ER’s share. From a less than 1% market share  in 2011, generic oxymorphone ER rose to capture 37% of prescriptions written in 2015, comprising 25% of total spending for both versions combined. Spending per user for brand name Opana ER had fallen very little while the cost of the generic ER versions per user rose considerably. It appears to me that the presence of a generic competitor has prompted Endo to hold its price rather steady, while at the same time giving the marketers of generic forms cover to shadow-price  to more than half that of the brand name.

The generic forms of the immediate-release versions of the drug have always filled many more prescriptions for more beneficiaries than branded Opana. Paradoxically, as immediate-release Opana rapidly lost its customer base, Endo aggressively raised its price– presumably to mitigate the damage.

Who controls the FDA?
Whether any of the expert panel’s recommendations are accepted by and turned into policy action by the FDA is not yet known.  Representatives of Endo and some their allies from professional organizations of pain doctors were present to make their cases.  (I gather they were not supportive of market withdrawal.) The FDA has usually followed the recommendations of its panels, but 2017 begins a new season for the FDA. The new Secretary of Health and Human Services is being reported to have used his legislative influence to his personal benefit in the past when he was a congressman.  The current nominee for the new FDA Commissioner has also benefited personally (and substantially) from business relationships with the pharmaceutical industry.  He is promising to abstain from decisions involving some 20 different companies!  In my opinion, abstinence will not solve possible conflicts of interest any better than it prevents pregnancies. Do we really want an FDA leader who would have to be so withdrawn?  Certainly any decisions made that are favorable to the industry as a whole will be good for his former business partners.  Others will want to keep the boss happy, and as a federal agency, the FDA is there to be leaned on.  I have already written of my opinion that the FDA has been captured by the industry it is supposed to regulate. I can only see that capture getting consolidated, and not to the benefit of people who need to take safe, effective, and affordable medicines.  The interests of big-business in Washington are decidedly on the ascendency!  Although I hope for better, I will not be surprised if the Opana panel’s recommendations are ignored or watered down.

As usual, if I have made an error of fact or interpretation in this complicated business, please help me fix it.