Bad heroin is an oxymoron, but over the past week, several dozen opioid overdoses appeared in local emergency rooms or were rescued by emergency medical technicians.  At least one died.  It is being reported that some 300 overdose cases were reported in our region.  Since these patients responded to the opioid-specific rescue drug, naloxone, it is assumed they overdosed on one opioid or another.  Toxicology studies are pending, and public health authorities are not overstating what they know, but we can reasonably assume the substances injected or otherwise consumed contained an unexpectedly high amount of heroin; the powerful synthetic opioid fentanyl; or carfentanil, the new-to-the-scene, elephant-strength, fentanyl look-alike.  For decades, heroin available to end-users has been cut, or diluted with a variety of non-opioid substances – some more benign than others.  In recent years, the availability of higher quality heroin from Mexico has both driven down the price and increased the potency of street heroin.  Presumably both sellers and users have been adjusting their practices to account for the greater potency.  Uncertainty about the purity or safety of available heroine products is said to be the reason that addicts in southern Indiana chose the prescription drug Opana as their opioid of choice.  This of course did not protect them from an accompanying epidemic of HIV infection and viral hepatitis.

Really-bad heroin.
For reasons not fully known to me, for the past year or more, heroin preparations used by addicted individuals have been shown to contain fentanyl.  It is apparent that these augmented preparations can catch whole communities of users by surprise.  The arrival of heroin with augmented lethality is signaled by an increase in overdoses and deaths within a confined geographic area.  While I was there in the summer of 2015, such an outbreak of heroin-associated deaths occurred in Washington County, Pennsylvania.

Whether the offending additive was fentanyl or its cousin carfentanil is relevant not just to law enforcement, but for the rescue community.  Unexpectedly high doses of naloxone are required to wake up individuals who have ingested these super-opioids.  The appearance of such overdose outbreaks caused by more highly purified heroin or other opioids announces to a community that their problem with drug addiction is worse than they thought.  I take that to be the message for us in Louisville.

Connection with prescription opioids.
The overdoses here in Louisville and elsewhere are being caused by the illegal opioid heroin augmented with fentanyl, a legal drug illegally used.  It is generally accepted that a large portion, if not the majority of heroin users start down that path of addiction using prescription opioids.  Certainly here in Kentucky and adjacent states with major opioid addiction problems, the extent of heroin use and the volume of prescription opioids to the general public usually go hand-in-hand.  It is not a good omen that in Kentucky we are exposed to an inundation of prescription opioids of diluvial proportion.  It is therefore not a surprise that we also lead the nation in newly reported cases of Hepatitis-C, and are right up there in accidental deaths associated with drug overdose.  Based on Medicare, Medicaid, and KASPER databases, I have written about the abundant availability of prescription opioids in Kentucky and adjacent states.  The pill mills that openly gave away opioids as fast as they could be handed out are being shut down, but the variation in the willingness of physicians and other medical providers to prescribed opioids remains frankly stunning.  Understanding whether these differences can be justified medically will be a difficult yet essential undertaking for the nation.

Super-prescribers.
As I began to tackle the 2014 Medicare-Part-D drug utilization and cost database released earlier this month, I was both surprised and disappointed to learn that of the top 20 most frequent prescribers of opioids to Medicare patients nationally, four practiced in Kentucky.  On further review, five of the top 30, and seven of the top 40 practice in the Commonwealth!  In the four highest volume opioid-prescribing specialties, and in the two main pain management specialties, Kentucky’s healthcare providers prescribed opioids more often than their national colleagues.  I prepared an interactive chart and a US map identifying the states where the 1000 most frequent prescribers of opioids to Medicare Part-D patients practice. [Note that Medicare uses a broad definition of “opioid” that includes drugs like tramadol, methadone, and buprenorphine.] 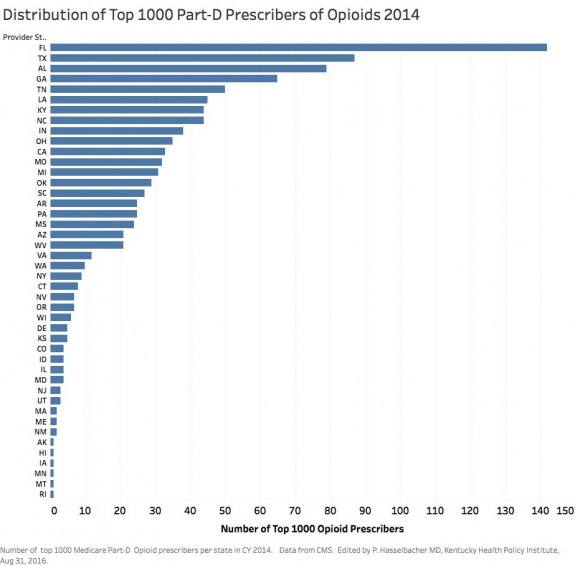 Some numbers.
In 2014 there were 503,804 Medicare prescribers who wrote more than 10 prescriptions or refills for opioids.  The most frequent prescriber wrote 26,449 prescriptions.  I calculated that based on a five-day work week with no vacation this came out to 102 prescriptions per day for Medicare patients alone.  The range of prescription count for the top thousand most frequent prescribers spanned 3393 to 26,449.  Kentucky had 44 of the top thousand.  Only six states had more.  We might predict that as a matter of chance, states with large populations might have higher numbers of volume prescribers.  Nonetheless, the distribution of the states with the largest numbers of super-prescribers largely overlays a map of states with larger numbers of opioid prescriptions overall, large numbers of accidental deaths, opioid addiction, or hepatitis cases. Florida and Texas – you must have a real problem! 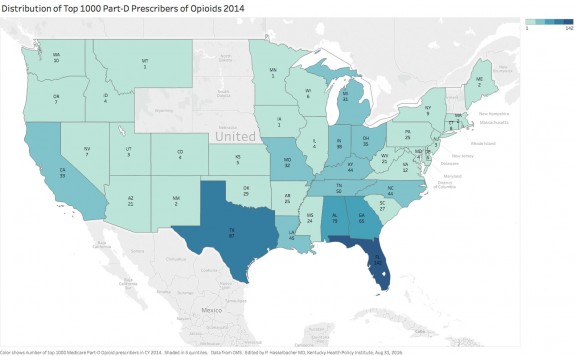 Who is writing all these prescriptions?
It used to be that the identity of physicians prescribing any drug was largely a secret from the public.  However, with the advent of Medicare’s publication of its Part-D utilization database, individual prescribers of drugs from Tylenol thru fentanyl are now identified by name.  I am in hopes that this knowledge will allow prescribers to compare themselves to their peers and reconsider their practice habits, or will identify individuals or regions deserving of attention from professional and standard-setting organizations.  It is my professional opinion that the disparities in rates of prescription are not defensible medically.  Sadly, in Kentucky, individuals responsible for oversight of opioid prescribing standards have set the bar very very low.  A continuing medical education session sponsored by the Kentucky Medical Association that I attended a few years ago focused largely on how to structure the medical record to survive an outside audit rather than whether or not opioids are appropriate for a given condition.  The Kentucky Board of Medical Licensure provided names for nominations to the Governor’s Kasper Advisory Council leading to the appointment of one of Kentucky’s highest opioid prescribers to that standard-setting supervisory body. Here is a list of the top 1000 Medicare prescribers of opioids in 2014.

It is my belief that only by decreasing the number of opioid first-doses that will we even begin to grapple with this terrible problem.  National organizations such as the CDC have acknowledged this. It is my understanding that the Surgeon General sent every physician in the nation a mailing from that organization asking them to think twice before prescribing opioids for nonmalignant or terminal conditions.  Here is a copy.   An surge of deaths from individuals being prescribed both opioids and benzodiazepam sedatives like Valium just prompted the FDA to issue its highest level of warning against that practice – the dreaded black box that appears in package inserts and advertisements.  This warning should not have been necessary but sadly, many prescribers apparently still needed to hear that message. (I will query the database in this regard.)

Controlling our opioid-abuse epidemic will be enormously difficult.  Experience with other substance addictions such as to tobacco and alcohol suggests that problems with opioid addiction will never go away.  It was experience with the opioid group of drugs that essentially defined the science and language of addiction.  Although the aggregate cost to society of opioid addiction is probably not as great as either tobacco or alcohol, its effects are similarly broad.  Is not just the user and their loved ones who pay the price.  To fund their habit, users disrupt the lives of all of us.  One can only speculate how many robberies, murders, or organized crime activities are consequent to putting illegal opioids into the hands of those whose craving is not to be denied.

Why go halfway?
In the spirit of suggesting that outside-the-box solutions must be considered, I offer this one again.  What would happen if the personal use of heroin or nonmedical use of prescription opioids was decriminalized?  Why not provide opioids of predictable and safe quality to individuals who are addicted, along with syringes in a safe place to use?  For many, these safe alternatives would be part of a medication assisted treatment program.  For others it would provide access to whatever other effective treatment is available, or offer a holding pattern that is at least no worse than the nightmare world where we allow addicts to flounder. Why would this not be a lot safer and a lot less expensive for all of us, user and non-user alike?  What would happen to the number of home break-ins?  What would happen to the number of drug-related murders?

The major fear of course is that making nonmedical opioid use safer and available might lead to more opioid addicts.  I do not know if that would be the case.  Certainly the punitive and moralistic approaches we are taking now have proven themselves to be abundantly ineffective.  It seems to me as a society that we have already made the decision to try to help opioid-addicted individuals by structuring a response revolving around keeping them alive with the rescue drug naloxone.  Is it not logical then to take the next step and keep them safe, and to make it at least possible for them to live a more productive and healthier life?  It is my belief, that opioid addiction is a fellow traveler with despair, with poverty, with unemployment, and with many of the other non-medical determinants of health.   If we are truly serious about dealing with opioid addiction and the social disruption that accompanies it, we will have to confront a very broad range of issues.  We should be doing that anyway.

I have made a  suggestion.  What is yours?

3 thoughts on “A Batch of Bad Heroin Arrives in Louisville.”