Louisville’s Courier-Journal this week featured an opinion piece by Andrew Rutherford, President of the Kentucky Academy of Physician Assistants, advocating for the passage of Kentucky Senate Bill 55 which would authorize physician assistants in Kentucky to prescribe controlled substances. Emphasizing the stakes involved in the proposal, articles later in the week reported on the latest rash of opioid overdoses in our region– presumably due to the inevitable fentanyl-enhanced “bad batch” of heroin.  Several on-line commenters to the second articles suggested that since those who overdosed had made their own risky-decisions, that they should be permitted to suffer the consequences without an intervention of attempted resuscitation. It is suggested that this Darwinian mechanism would ease the opioid abuse problem.  Unfortunately however, among the personal choices leading to opioid addiction is the choice to visit a licensed healthcare professional who, with good intentions or not, prescribes opioids.  Once an individual becomes addicted, the concept of “choice” become irrelevant.  A reasonable question to be asked is, “Do we really need to put more opioids in the hands of Kentuckians?  My answer would be an emphatic no.

Request not out of line with national practices.
The addition of opioid prescriptive authority to the existing five authorized categories of medical providers in Kentucky is reasonable to consider, is multi-dimensional, and invites consideration of fairness. Advanced practice Nurse Practitioners (APRNs)–  but not all registered nurses–  were granted the privilege of prescribing controlled substances a few years ago if they have a collaborative agreement with a licensed physician. Note that APRNs’ scope of practice is defined by the Board of Nursing Licensure which has granted them considerable practice independence. Physicians Assistants (PAs), whose scope of practice is controlled by the Kentucky Board of Medical Licensure, may not practice or bill independently for their services.  Since PAs (of which there are nearly 1000 in Kentucky) are already practicing under greater professional supervision than APRNs, the argument can be made that for purposes of improving availability of services to Kentuckians, and for practical purposes of expediency, why should they not be able to prescribe the same drugs that their supervisors do?  I would argue however, that given our current epidemic of heroin and prescription opioid addiction that is hollowing-out Kentucky’s communities, that the current standard of care is not one to follow. We must reduce not only the total volume of prescription opioids dispensed, but also the number of first doses that start many– if not most– down the uncontrolled road of addiction.

Can we predict what will happen?
The availability of public-use files summarizing the kinds and volume of drugs prescribed to patients across the nation suggests what would happen to patterns of opioid prescribing in Kentucky should PAs begin to prescribe controlled substances.  To summarize, PA’s across the nation prescribe a lot of opioids. Furthermore, opioids make up a larger proportion of all prescriptions they write than do other generalists– at least to aged and disabled Medicare patients.

Below is an abbreviated table of the aggregate number of opioid prescriptions and refills prescribed to Medicare Part-D beneficiaries in 2014 by the twelve highest-volume specialties.  (A full table of the 151 opioid-prescribing specialties that year is available as pdf file here, here as an Excel file, and in the interactive visualizations of the data referred to in this article.) Note that for purposes of patient privacy, Medicare only provides numbers for prescribers of more than 10 total opioid prescriptions. Recall also that this data is necessarily limited to prescriptions to patients covered by Medicare Part-D prescription plans. However, I have demonstrated that prescribing patterns of opioids to Medicare patients are predictive of opioid prescribing to patients in general for a given geographic area, be it county, city, town, or Zip code. 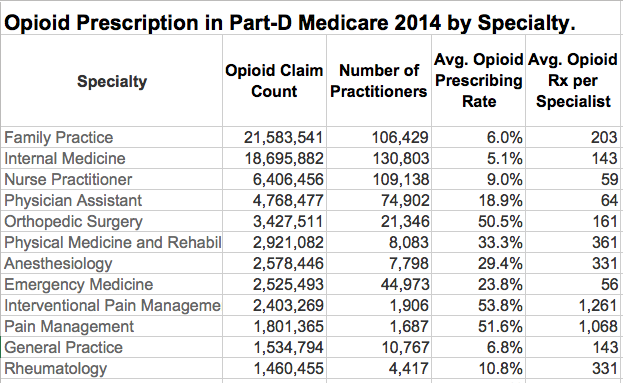 Suffice it to say, neither PAs nor nurses are shy about prescribing opioids to their patients. Many individuals in these four specialties prescribe spectacularly high volumes of opioid prescriptions compared to their peers.  In these outliers lies crucial information that we must understand if we are ever to come to grips with the curses of opioid overuse, abuse, or diversion.

Refer also to the following Box Plot of the number of prescriptions and refills prescribed for Medicare Part-D by every individual physician in the nation for the four specified general practice and the two principal pain-management specialties. (Click to enlarge.)

The message I get from inspection of the averages and medians in this data visualization is that the number of opioid prescriptions written by the vast majority of generalists is very small. (Move your cursor over various data points and graphic elements in the interactive versions for specific statistical data.)  In every specialty, many prescribers can be considered to be far-outliers compared to their peers. Surprisingly to me, the upper range of the number of prescriptions by generalists is not all that different from that of pain management physicians! Some of the numbers are truly colossal.

Stunning to me are the large numbers of providers in these and other specialties with very high Opioid Prescribing Rates. Of all opioid-prescribing professionals in all specialties, there are almost 4000 whose prescribing ration is greater than 80%.  This, as they say, is huge! 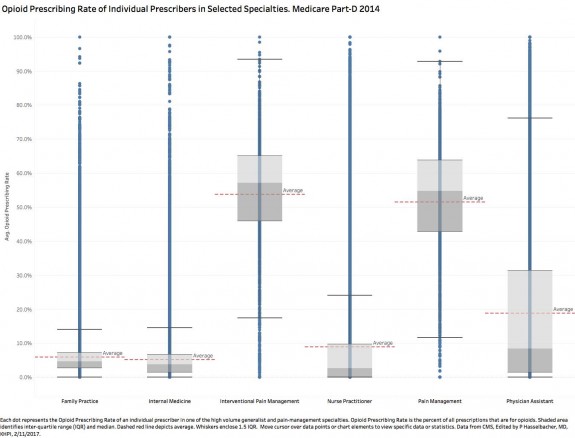 The following map makes it clear that across the nation, PAs provide substantial amounts of opioids. States vary widely in their Average Opioid Prescription Rates.  In most of the states bordering Kentucky, more than 21% of all prescriptions written by PAs are for opioids. This seem extraordinarily high to me and deserves to be explained and justified. (A curious exception is West Virginia with a low rate of 7.5%. Why too are Mississippi and Alabama so different? Perhaps a reader can offer an explanation.) (See the interactive version for data details.)

[Addendum Feb 13:
I think I just answered my own question about why the Opioid Prescribing Rate (OPR) in West Virginia was so low, even though it is part of ground-zero of the opioid addiction epidemic. The answer lies in a current summary list provided by the Department of Justice outlining restrictions to the prescribing of scheduled drugs for different categories of prescribers. Of the 51 states and District of Columbia, it is true that as of this month, Kentucky joins Puerto Rico and the Virgin Islands prohibiting physician assistants to prescribe controlled substances. However, 13 other states restrict the prescribing of at least Schedule II drugs to one degree or another. (Schedule II drugs include the “hard” opioids which are at the root of the epidemic such as hydrocodone, oxycodone and their ilk, and many non-opioids subject to addiction or abuse.)  As it happens, in West Virginia, neither physician assistants nor nurse practitioners are permitted to prescribe any Schedule II drugs whatsoever. This restriction is obviously having its intended effect– at least on physician assistants! 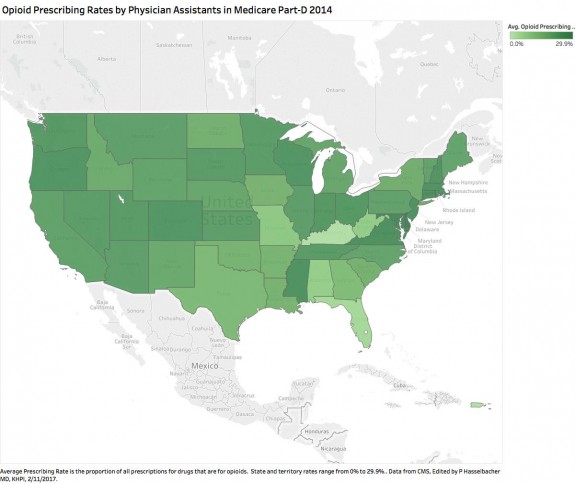 There may well be justifications for this high-volume opioid prescribing for at least some of these professionals. My suggestion has been, that as a matter of public policy, the individual practices of all far-outliers deserve to be looked at by licensing authorities and public health officials. It has been my observation so far that every practitioner reported in the media who has run seriously afoul of the law or medical ethics with respect to opioid prescribing has been among these outliers. It seems highly likely that should physician assistants be granted prescribing authority, that the number of health professionals prescribing large amounts of opioids in Kentucky will also increase. Whether we will see a zero-sum game or an aggregate increase in the flow of the spice cannot in my opinion be predicted with certainty.

It takes more than MDs and DOs.
I do not consider here the general concept of whether expanding the privilege of independent practice or prescribing is a good idea or not. My loyalty to my profession, and the 12 years of my additional education and training after high school make it difficult for me to believe that nurse practitioners and physician assistants are equivalent to physicians in the overall skills they bring to patient care. It is true however, that on-the-job experience improves the skills of all practitioners. It is also true that physicians choose not to practice in all areas where their services are needed, but neither is it clear to me that nurses or physician assistants have filled the gaps.  It is also a truism, that in our new age of evidence-based medicine, physicians, nurses, and physician assistants alike follow generally accepted protocols and guidelines. (An important caveat necessary for a good result is that the diagnosis triggering the guideline must be a valid one!)  Some criticize that following data- and outcome-based guidelines or recommendations is “cookbook medicine.” However, is it not true that following a recipe generally results in a reproducibly tasty product? My belief is that we must move even more to the concept of team care. There is so much new information generated that even in my own sub-specialties I often needed to go to the books or to ask for the advice of others. The concept of the solo practitioner out there on their own trying to do it all has become untenable– if it ever was.  It is my opinion that medicine is best practiced within networks of cooperative collaboration including many types of health professionals. I believe such a result will be one of the major advantages of the universal healthcare system in America that many dream of.

In conclusion.
Should, in their wisdom, the Kentucky Legislature approve the supervised prescribing of opioids by physician assistants, I would not personally go to the mattresses to oppose. Perhaps such approval should continue a complete prohibition of Schedule II drugs, or otherwise consider limits on prescription such as a maximum number of doses.   I would however, first or simultaneously take more aggressive action to grapple with the over-prescription of opioids by Kentucky’s existing healthcare professionals. What we are doing now is not working.  We should not throw more fuel on the fire.

Let me know if these links are not working for you, or if there is a problem with your portable devices.  If I have made an error, help me correct it.  Feel free to comment publicly.